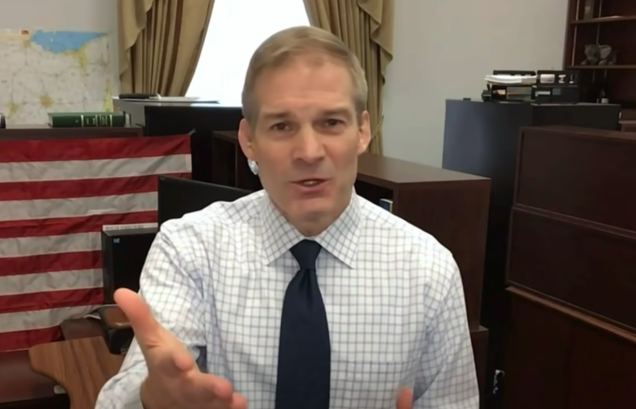 Former Ohio State wrestling coach Adam DiSabato appeared before the Ohio House Civil Justice Committee last week to once again accuse Jordan of turning a blind eye to sexual abuse while the homophobic lawmaker worked as assistant coach for the school’s wrestling team from 1986 to 1994.

Quick backstory: In 2018, Jordan, who has served as the U.S. Representative for Ohio’s 4th congressional district since 2007, was blamed for willfully ignoring reports of sexual misconduct made by male athletes against the team doctor, Richard Strauss.

An exhaustive investigation by the university concluded that Strauss abused as many as 1,500 to 2,000 people during his tenure as the team doctor, resulting in the school paying over $40 million in settlements to more than 160 victims.

Many of Strauss’ accusers who have spoken publicly said they were groped and inappropriately touched during physical exams, or ogled in locker rooms. Many told investigators that they thought the doctor’s behavior was an “open secret” and that they believed their coaches, trainers and other team doctors knew about it.

The students described the examinations as being “hazed” or going through a “rite of passage.” Athletes joked about Strauss’ behavior, referring to him with nicknames like “Dr. Jelly Paws.”

Jordan, a staunch Trump loyalist and vehement homophobe, has long denied knowing anything about the abuse, and for several years he has managed to wiggle his way out of trouble.

Last week, DiSabato testified before the Ohio House Civil Justice Committee, declaring that Jordan refused to look into the accusations against Strauss, who committed suicide in 2005.

DiSabato also said Jordan was well aware of the open-shower facilities where the alleged abuses happened, despite him claiming otherwise, and that he actively aided and abetted in the cover-up.

“Jim Jordan called me crying, groveling, begging me to go against my brother, begging me, crying for a half-hour,” DiSabato testified. “That’s the kind of cover-up that’s going on there.”

DiSabato’s testimony is a part of a hearing on legislation that would grant survivors of Strauss’s abuse the right to sue Ohio State for damages after the statute of limitations has run out.

In 2019, NBC News reported that roughly 350 men were trying to sue the university, claiming they were abused.

DiSabato has alleged in the past that, in addition to ignoring the abuse, Jordan would hand out a “King of the Sauna” certificate every year to the athlete with the most clever banter while in the showers–the same showers where Strauss is accused of performing the bulk of his sexual abuse. He also said Jordan would hang out in the sauna daily.

Jordan has long denied all of the allegations against him and swears that he never witnessed any abuse take place in the locker room.