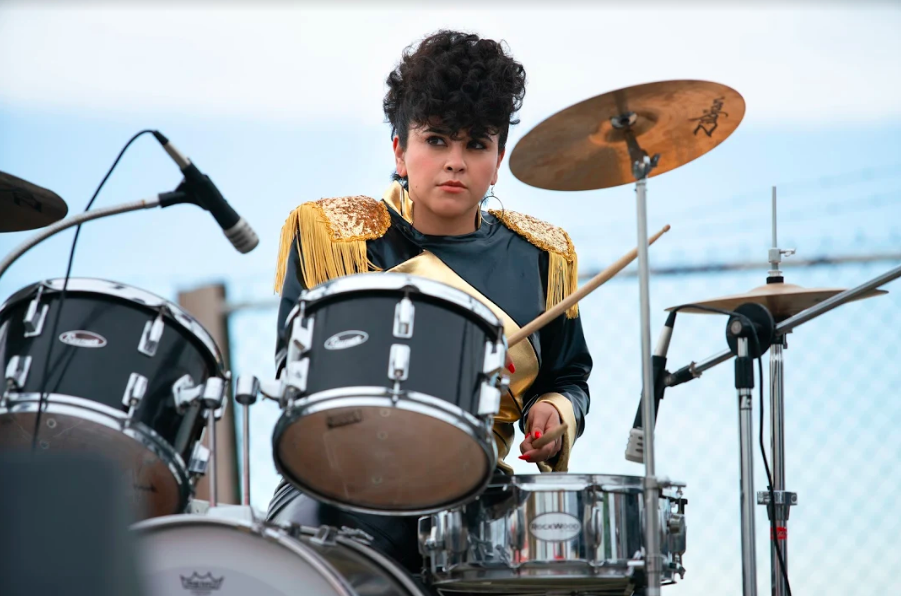 “Selena’s music and legacy mean everything to me,” says Noemi Gonzalez.

The up-and-coming Mexican-American actress landed the role of a lifetime, cast as the late Tex-Mex icon’s sister Suzette Quintanilla in Netflix‘s Selena: The Series (streaming on Netflix Dec. 4). “I know how much [Selena] shaped me and influenced me as a woman, as an actress, as a professional, and now as a musician.”

In a male-dominated Tejano and regional Mexican music scene, Selena was one of the few women able to achieve stardom. She achieved this feat in style with bedazzled bustiers and disco-inspired bodysuits that hugged her curves, earning her the nickname “Mexican Madonna.”

Selena was murdered in March 1995, but the queer Latinx community continues to gravitate towards Selena’s legend and colorful songs such as Bidi Bidi Bom Bom & Amor Prohibido, a song that speaks about a forbidden romance that she was ready to risk it all for. In drag culture, she remains a staple with Valentina living her Selena fantasy on RuPaul’s Drag Race All-Stars season four.

Throughout her meteoric rise in the ’80s and ’90s, Selena was backed by her family band with Suzette on drums and her brother A.B. Quintanilla on bass guitar. A.B. later served as her main songwriter and producer.

Preparing to play Suzette on the upcoming series, Gonzalez immersed herself in the world of drumming. “I’ve just had so much strength,  inspiration from Selena’s bright light to be taking [this role] on so that I can contribute to [Suzette’s depiction] in any way that she’s given to me,” she says.

Gonzales earned this spectacular role, spending the past decade in roles on series such as 2013’s East Los High and most recently, a multi-episode run on the soap opera The Young and the Restless.

And it hasn’t always been easy. Gonzalez is navigating the industry as a Latina and openly bisexual actress, neither of which is exactly embraced by Hollywood. As a Latina breaking through, she is inspired by Selena’s story while having always waved her own bi flag proudly. Gonzales is pushing the boundaries of representation for both her underrepresented and marginalized identities.

With a starring role in Selena: The Series, alongside Christian Serratos as Selena and her former East Los co-star Gabriel Chavarria as A.B., she has reached a new career level. And it doesn’t hurt that this year Gonzales also made her big screen debut in The Tax Collector alongside Shia LaBeouf and George Lopez.

Gonzales chatted with Queerty about playing Suzette in the series, Latinx and bisexual representation in the media, and what we can expect from her next.

As an actress, who are some of your inspirations?

Right now my inspiration is definitely Viola Davis. Someone I’ve been admiring for a long time is Natalie Portman, especially as she played a young actress in Léon: The Professional. I’ve watched that movie over and over again. Jessica Chastain is someone who is very smart. You can just feel the radiance of her intelligence and her grace. I fell in love with her character in The Help. Latina-wise definitely Rita Moreno. The obvious ones would be Jennifer Lopez for definitely opening doors for us, America Ferrera, and Eva Longoria. They’re definitely strong women, who are not just acting, but now also producing and continuing to open doors for Latinx representation. It’s amazing.

On shows such as One Day at a Time and now Selena: The Series, we’re seeing more Latinx-led casts. How do you feel to see that?

I feel seen! Seeing that we have Latinx representation with these Latino and Latina families. These queer Latino families stories being told with One Day at a Time and Love, Victor. It really matters to show up to support these stories, so that they can keep coming through. Latinos and Latinas, we watch a lot of content. It really helps to have that love and support from the community first, and then people start to catch on. There was Baker and the Beauty and my friend Chelsea Rendon’s show Vida. We have incredible, valuable stories to share and tell. You’re going to really want to see more of them.

How did you prepare for the role of Suzette?

By reading books and listening to everything Selena and Selena y Los Dinos-related. I watched a lot of performances on YouTube over and over. Suzette gave us tapes for us to listen to of memories and stories. I was listening for two reasons: I was trying to get her voice down and also I was really trying to feel her essence and understand the world I was about to go into. I cut my long hair and I permed it. I changed my general appearance. The most challenging was that I learned the drums. I learned how to play without any previous experience. It really was an amazing opportunity to strip Noemi and put on Suzette.

What was one of your favorite moments from filming the show?

One of my favorite moments from filming the show has got to be playing Como La Flor live. Seeing Christian Serratos look so good in Selena’s iconic white look and seeing Gabe [Chavarria] in his signature A.B. look for the first time. Because of the way we filmed it, we hadn’t gotten there yet. So two-and-a-half months after filming all these earlier looks and then going to the Como La Flor look, it was a really wonderful opportunity to rock out and feel Selena’s music and feel her spirit there with you while you were giving your all in your character on your instruments.

Why do you think Selena’s legacy and music connects with the LGBTQ+ community?

I think Selena really resonates with the LGBTQ+ community for more than one reason. I think one: she owned who she was and exuded it and there’s something really prideful about being a queer individual. When you see someone else being so dynamic and owning who they are and being commanding and just radiating, you can’t help but gravitate to that. At the same time, we have her iconic song Amor Prohibido, which has definitely become an anthem for our queer family. I think lastly, the fact that she broke barriers, showing that you can do anything regardless of your background. If people assume you can’t do this because you’re a woman in a male-dominated industry. I think a lot of people can relate to being queer in a straight-dominated world, so it’s really nice that we have someone that we can lean on.

What was it like to work with Shia LaBeouf in The Tax Collector?

The Tax Collector film was an amazing experience. It was so creative to have the opportunity to do that much rehearsal and training before a film, so we were really connected and supportive of each other. On the last day of rehearsal, I led everyone in prayer to have a beautiful production. We all hugged in a time where we could hug. We had a blast on that set. It was very Mexican-American. Very Chicano. Shia was the sweetest individual ever. He’s such a great artist. A true definition of an artist. A dedicated craftsman right there. I really respect him and have so much love for him.

Do you have any advice for a queer Latinx person who wants to become an actor?

If you’re a queer Latinx person and you want to be an actor, I say own who you are. Really define who that is and also make it possible to lean into that fully. A lot of times people don’t know who they want until you come into the room. And they’re like, Yes! That’s what I want. But if you come in second-guessing yourself, feeling like you have to put your queerness away, then people are going to see that second-guessing and they’re not going to feel like they’re just with another individual. All these characters are there and people want to tell these stories too. So just know that, stay strong, and stay ready. They want you to tell the story the way only you’re going to tell it as a queer individual.

What can we expect from you next?

I’m developing a TV show with Chelsea Rendon, one of my best friends and a fellow actress, so it’s going to be very exciting when we finally have that rolling out. It’s cool to have that experience as an actress and now developing a TV show with her. Dark/Web, a show that I also did, is out there. It’s Emmy Award-winning and incredible. I highly recommend you watch it.

Selena: The Series premieres on Netflix on Friday, Dec. 4.