A sheriff in Michigan insists that a Grindr account featuring a confederate flag profile image and the headline “White Guys Only” does not belong to one of his officers.

Macomb County Sheriff Anthony M. Wickersham confirmed this week that images sent from the Grindr account do, in fact, show one of his employees, but the account is a fake.

The images first emerged last week when someone by the name of Ian Peters posted them on social media, along with a screenshot of the deputy’s personal Facebook page.

Included on the alleged Grindr profile was an image of the deputy in uniform plus another one of him posing in front of a mirror. The bio read: “You’d think they’d make an app just for white guys…” 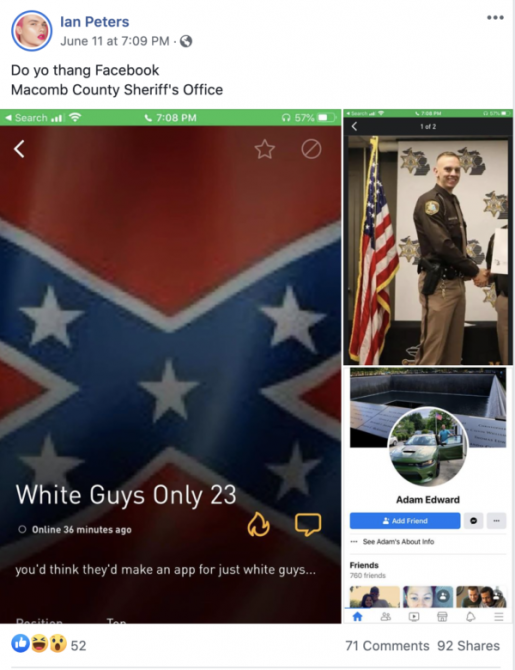 Speaking to local LGBTQ publication Between the Lines, Peters says he felt compelled the share the screenshots because “why would a cop literally be frolicking around on a gay dating app like that, being straight-up racist and giving out that image and energy?”

He continued, “I just thought it was plain disgusting. And it makes me really upset to know that the people who are supposed to ‘serve & protect’ the community I live in are like that. Especially with everything going on in the world, and a cop from my area is gonna be out frolicking like that? Absolutely disgusting.”

After seeing the images, Wickersham says he wasted no time launching an internal investigation.

“The deputy was immediately notified and … denied any involvement,” he says, adding that the material was then “turned over to our computer crimes task force to identify the individual that posted it.”

But this isn’t the first time that particular deputy has been targeted, Wickersham says.

Earlier this year, he received an anonymous email from “a concerned citizen” about the same deputy’s alleged online behavior. After tracking the IP address of the objectionable material, however, the department cleared him of any wrongdoing.

“I believe it was about three-to-four months ago, we had an email that was sent to me anonymously [from] a concerned citizen of a deputy’s actions,”  Wickersham recalls.

“The deputy denied it, our computer crimes task force went in and looked and we were able to identify the individual that created the account and was trying to smear the name of the deputy. At that point, the deputy didn’t want to pursue anything and the issue was dropped.”

When asked why someone might be motivated to continue to smear the deputy, Wickersham said he wouldn’t comment on the ongoing investigation.

“Well, at this point, we know what the circumstances were on the first one, and right now it’s just hard to speculate. And nor do I want to say anything as the investigation is going on, but it’s definitely not him that’s posting this kind of stuff online,” he affirmed.

“The pictures up [are] him, and it’s our guy. And we’re working on identifying [the person who posted them], and if we find them we will prosecute the individual responsible.”

Related: Police lieutenant busted for allegedly having Grindr PNP parties while on duty

Subscribe to Queerty for a daily dose of #life #anthonym.wickersham #fake stories and more