Fifty years ago the mother of all gay icons (at times in the literal sense…see also Liza & Lorna), Judy Garland died in a London hotel room.

As the gay community of New York gathered to mourn in a local bar, police tried to raid the establishment for the umpteenth time. This time though, the grieving patrons fought back, launching what we now call the Stonewall Uprising. It’s one of several reasons the queer community uses the rainbow as a symbol of Pride today.

In honor of half a century of pride in New York City, and in honor of our dear departed Ms. Garland, we’ve selected essential viewing for anyone wanting to understand her talent and allure. Few singers have the kind of natural bravura of Judy Garland, and fewer still have her star quality.

When leaving the pride fest after five wine coolers too many, curl up with any of these titles to sober up, and to celebrate one of the greatest icons ever. 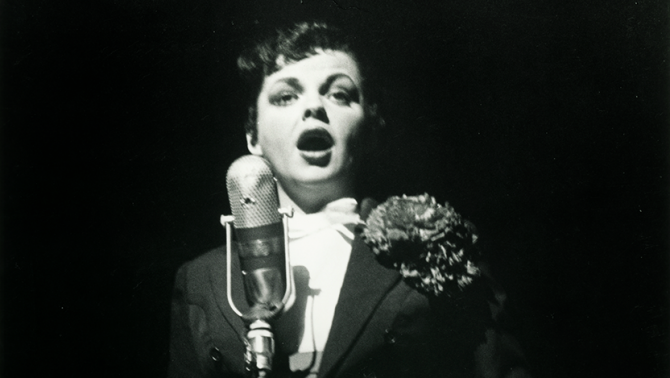 Just in case you, dear reader, know nothing about Ms. Garland and her remarkable life, try starting with this documentary. Sid & Judy focuses on her longest relationship to husband number three, producer Sid Luft. Calling their love affair torrid understates the situation; they had a combative if passionate relationship, often complicated by Luft’s gambling addiction and Garland’s drug abuse. Still, Luft managed Garland to a career resurgenece as one of the most popular concert singers ever, and helped control her demons as best he could. The new film from Showtime premiered at Frameline, the San Francisco-based queer media arts foundation. It also shows at Outfest in Los Angeles July 27.

The Wizard of Oz

If, somehow, dear reader, you’ve not yet seen The Wizard of Oz which might just be the greatest movie ever, please stop what you’re doing. Tell your boss you’re leaving. Cancel your date. Tell your friends you can’t make it. Or better yet, invite all of them over to screen the timeless classic that features Judy Garland in one of the greatest performances ever, coupled with unforgettable musical standards like “Over the Rainbow” and some of the greatest spectacle Hollywood has ever assembled. Entertainment doesn’t get much better than The Wizard of Oz.

Meet Me in St. Louis

Garland felt she’d never looked more beautiful than when she appeared in this classic Hollywood musical, directed by queer director—and future Garland husband—Vincente Minnelli. She still plays the typical girl next door, as with so many of her films. This time though, she gets the guy in the end. She also gets some new standards, including “Have Yourself a Merry Little Christmas” and “The Trolley Song.” Brimming with Main Street USA-type nostalgia, the film presents Americana at its most ideal.

Garland pairs with old school sexpot Gene Kelly in this, the mother of all “let’s put on a show” musicals. In a grotesque way, the film also offers a look at Garland’s volatility. Her weight visibly fluctuates from scene to scene, and at times she looks a bit haggard thanks to her off-screen demons. That said, the film is still a lot of fun, and it does contain one great showstopper, the Garland number “Get Happy.”

A Star is Born

Judy gave one of the greatest performances ever in this comeback vehicle, which more or less tells the same story of love and the perils of showbiz as the recent remake with Lady Gaga. As directed by out-gay director George Cukor, A Star is Born also offers some wonderful music, including Garland standards like “The Man that Got Away” and the show-stopping “Born in a Trunk” medley. The movie should have restarted Garland’s stalled out film career, though studio imposed edits ruined the continuity of the story. Fortunately for audiences today, a reconstructed version (featuring all but a couple missing minutes) shows the real thing in all its glory.

Outside the musical genre, Garland proved herself an effective dramatic performer. Case in point: this all-star drama about the Nazi war criminal trials at Nuremberg. Garland more than holds her own against acting heavyweights like Marlene Dietrich, Montgomery Clift, Burt Lancaster and Spencer Tracy. At times, she downright steals the show, as in one hysterical courtroom scene. That Judgment also was one of her last pictures underlines the sad fact: that she didn’t do more drama is our loss.

Mickey Rooney will forever receive mention alongside Judy Garland thanks to a life long friendship between the pair, and a series of films in which the two played opposite one another. This film marked the first of the long-running Andy Hardy series starring Rooney, and established the prototype of his Andy as the unlucky in love all-American boy, and Garland has his underappreciated friend Betsy. Dated by today’s standards, the film caused a sensation upon its premiere and helped catapult Rooney and Garland both to stardom.

With movie roles virtually extinct and under dire financial pressure, Garland moved into TV in hopes of solving her money woes. The resulting show, which suffered from a rotating door of producers and an ever-changing format, nevertheless shows Garland at her most luminous, singing songs from her own catalog, as well as other popular tunes of the day. Even better, the show pairs her with some of the hottest talent of the time, including Barbra Streisand, Ethel Merman, Martha Raye, Ray Bolger, Steve Allen, Lena Horne, Nat King Cole and daughter Liza Minnelli. YouTube it and try not to get chills.