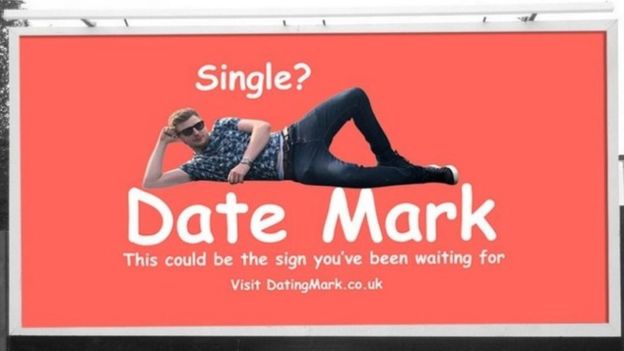 A straight dude from the U.K. who bought a billboard in hopes it of finding a date says he’s “flattered” by the flood of inquiries from men, but that’s not really what he was aiming for when he placed the ad.

30-year-old Mark Rofe paid £425 (roughly $550 U.S.) to put up the roadside ad on Fairfield Street in Manchester. It reads: “Date Mark. This could be the sign you’ve been waiting for” and directs people to visit www.DatingMark.co.uk to learn more about him.

“I’ve had more than 100 people get in touch,” he tells the BBC. “Unfortunately, half are men, but I’m still very flattered.”

Rofe, who has been single for a year, says the idea came to him while he was at the pub.

“I was talking to my mate saying how I was struggling on all these dating apps and I joked that I should put my face on a big billboard,” he explains.

“We laughed about it but then actually I thought what a good idea. I tried to make it funny,” he adds.

“Hopefully, I don’t come across as a desperate loser.”

According to www.DatingMark.co.uk, over 1,500 people have now applied to date Rofe. Here’s hoping he finds a match!