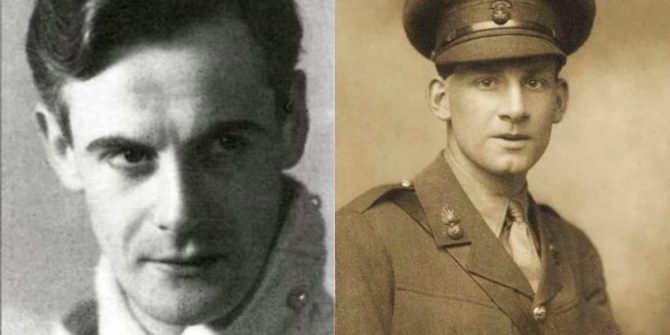 A student in the UK has uncovered a lost love poem by celebrated British poet Siegfried Sassoon, written to his boyfriend Glen Byam Shaw.

Julian Richards discovered the poem while researching Sassoon at Cambridge University. The poem itself consists of eight lines, written in 1925 about a night together with Shaw and how much Sassoon missed him. Richards says the poem was written when Sassoon was 39 and Shaw 20, while Shaw pursued a career in theatre. He would go on to become one of the most treasured British thespians of the 20th century, acting on stage to wide acclaim and directing friends like John Gielgud, Albert Finney & Charles Laughton to great success.

Upon Richards’ discovery of the poem, The Guardian published it for the first time. It reads:

A day after their first dinner together,

Sassoon was already full of yearning for his young lover:

‘Though you have left me, I’m not yet alone:

For what you were befriends the firelit room …

Sassoon biographer Jean Moorcroft Wilson claims the poem has remained totally unknown up until now. “What is important is that it’s written at a time when Sassoon believed that poetry had forsaken him,” Wilson says of the discovery. “He finds it very difficult to write poetry in the 1920s. He’s been so successful as a war poet that he doesn’t really quite know where his poetry lies. He’s sort of grasping for a subject.”

Sassoon penned the poem at a time when homosexuality remained illegal in the UK.