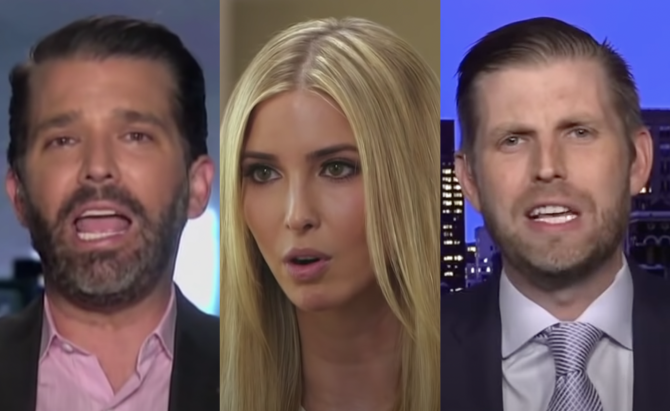 Michael Cohen wasted no time hitting the media circuit after being released from home confinement last week. The disbarred attorney spent Thanksgiving week making the rounds, speaking to everyone from CNN to NBC, and he has some very cryptic predictions about Don Jr., Ivanka, and Eric Trump in particular.

Speaking to Chuck Todd on Meet the Press yesterday, Cohen shared his thoughts about the ongoing case against the Trump Organization, as investigators continue digging into the company’s finances to determine whether Trump committed fraud by lying about his assets.

“Was I involved in much of the inflation and deflation of his assets?” Cohen told host Chuck Todd. “The answer to that is yes.”

But it’s what Cohen said a little later in the interview that has everyone talking.

“Allen Weisselberg is not the key to this,” he pontificated. “They are going after Donald, they’re going after Don Jr, Eric, Ivanka, a whole slew of individuals. Family, you know, family as well.”

Later, Todd asked, “Do you now believe that the Trump Organization is a criminal enterprise?”

To which Cohen responded, “I don’t even know how to answer that. Are they a criminal enterprise? Let’s just say that they committed crimes.”

Related: Tiffany Trump’s former BFF speaks out: “Her dad treated her like sh*t her whole life”

Cohen also confirmed that he’s handed over “thousands and thousands” to investigators and he believes there’s enough evidence to indict all three of Trump’s adult children.

“Rest assured, I am not their only witness, and most importantly, what I gave to them are thousands and thousands of documents,” he said. “And as you know in law, there’s something called documentary evidence. I’m not asking anybody to believe me. No different than when I testified before the House Oversight Committee. Every statement that I make, I’ve backed up with documentary evidence.”

He added, “I truly believe that they can indict Donald Trump tomorrow if they really wanted, and be successful.”

How long do you think Don Jr would last in jail❓😏

I just sit over here and wait for those prosecutions to happen. pic.twitter.com/ePVl30Mv91

BREAKING: Michael Cohen tips off investigators on who they should ‘squeeze’ to get to Trump!

I don’t know about anyone else, but I’m really tired of hearing about it and I want to see some action taken.

This country is worth saving, but as long as the criminal family is getting away with it, their followers will follow suit and commit more and more crimes in their name

Calendar years 2022 and 2023 are gonna be littttttttttt

Hoping January will be a big month pic.twitter.com/sQrgqn3xon

For once it’s good to be Tiffany.

“Trump, Eric, Don Jr and Ivanka WILL be indicted. It’s not if, It’s when”.

Won’t lie, I jizzed a little.