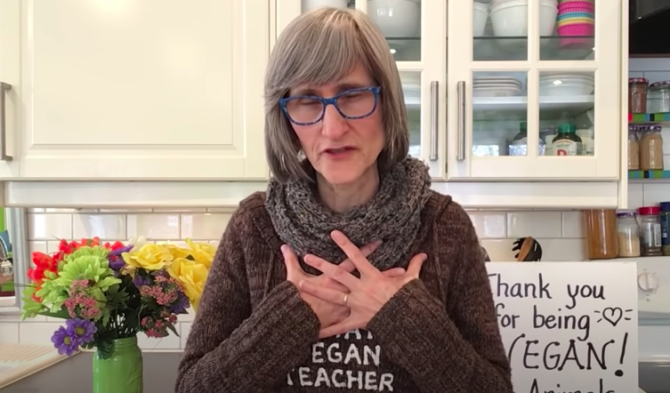 After stirring up a string of controversies over the past few months, Kadie Karen Diekmeyer (a.k.a. That Vegan Teacher) has been officially banned from TikTok for violating one too many community guidelines.

Prior to being kicked off the platform, Diekmeyer had amassed an impressive 1.7 million followers. She regularly posted videos comparing “veganphobia” to homophobia, berating LGBTQ commenters for contributing to their own oppression by eating meat, and insisting that coming out as vegan is more important and less selfish than coming out as gay.

Eventually, a change.org petition was launched calling for Diekmeyer to have her page yanked down.

“[That Vegan Teacher] has made blatantly racist, bigoted, discriminatory statements against anyone who doesn’t view veganism her way and her way alone,” the petition reads.

“Her targets have included minors under 18, the LGBTQ+ Community, Person’s [sic] with disabilities, people of the black community, various religions and more. Multiple reports have been made against her content yet her platform remains active.”

So far, over 20,000 people and counting have signed the petition.

Though it’s unclear whether that’s what prompted TikTok to finally give Diekmeyer the boot, as of yesterday, her channel was no longer available. A disclaimer says it was banned due to community guideline violations.

BREAKING NEWS THAT WILL MOST DEFINITELY CHANGE YOUR LIFE: That Vegan Teacher banned from TikTok. According to disclaimer on TikTok, she was banned due to multiple Community Guidelines violations. pic.twitter.com/1Y0hDX1ZKG

After being banned from her primary platform, Diekmeyer uploaded an angry 20-minute video to her YouTube channel slamming “censorship” and doubling down on her meat-loving critics.

Reports that Diekmeyer launched a new TikTok channel called “That Holocaust Teacher,” which she was using to compare eating meat to the Holocaust, began circulating on Twitter earlier today, although that account, too, has been banned.

The account on TikTok formally known as “that.vegan.teacher” is now going by “that.holocaust.teacher” and her most recent TikTok is comparing eating meat to the Holocaust. pic.twitter.com/XIJhFtBZAM

INSTANT REGRET: That Vegan Teacher banned again on TikTok. Her side account “That Holocaust Teacher” has been banner, along with apparently 12 other accounts she had under different names. Currently trying to verify the handles of all the other alt accounts. pic.twitter.com/QFJovRlBcU