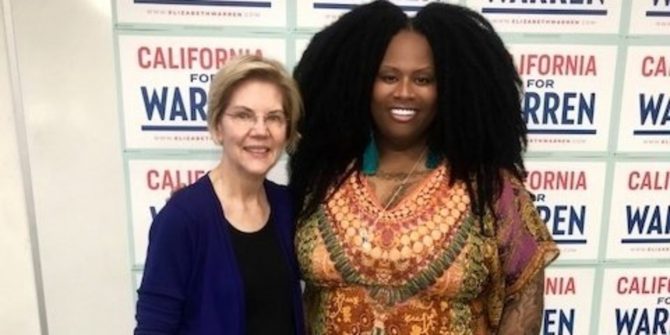 Transgender rights activist and talk show host Ashlee Marie Preston has come under fire for a series of past tweets that contain homophobic and racist innuendo.

Preston, a paid employee of Sen. Elizabeth Warren’s Presidential campaign, has apologized for the years-old remarks which appeared on her Twitter feed. One tweet from 2011 read “That is thee last time I help that f*ggot f*cker….he’s bringing ME problems Truman help him.” Another, dated 2010 reads “Latino and Asian businesses need 2 stop being rude & f*kn disrespectful, & I kno its A LOT to ask in CA but speak f*kn English 2* #yahisaidit.” 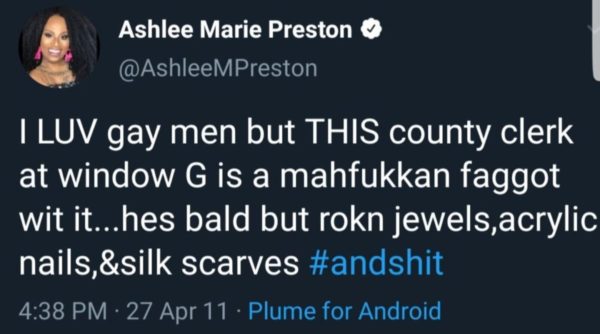 Preston’s apology, released to Twitter & Facebook, acknowledged her hateful remarks. “Taking accountability for the past, staying rooted in the present, and absorbing lessons for the future,” she tweeted, while including a long explanation for her words. She blamed her behavior on a methamphataime addiction she struggled with at the time, noting that she’s been sober for more than seven years.

Taking accountability for the past, staying rooted in the present, and absorbing lessons for the future. pic.twitter.com/yDGXLKX8jU

The tweets, however, appear to have exceeded her struggle with addiction. One tweet from 2018 contained veiled homophobia and threats of violence. “I’d beat the dog sh*t of out you; furry slipper wearing ass f*ck boy. IRL I’d smash your f-cking head in like a can of A&W Root Beer–But ima fall back and let you keep pretending for the internet…d*ck rider.”

Preston has a long history of incendiary behavior. In 2017, she publicly confronted Caitlyn Jenner for her support of Donald Trump, calling her a “f*cking fraud.” Jenner later apologized for her support. Preston also attacked Sen. Bernie Sanders, repeating a false claim that he had not attended an LGBTQ rights event in over 40 years.

In addition to her work with the Warren campaign, Preston hosts the podcast talk show Shook.