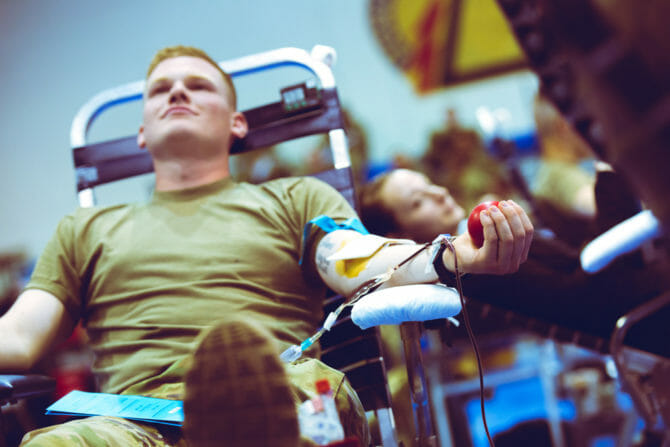 Donald Trump has been at war with transgender members of the Armed Forces since last summer, ever since tweeting they were no longer allowed to serve their country “in any capacity” because they’re too burdensome and distracting. Now, he’s turning his focus to soldiers living with HIV.

The Department of Defense’s new “Deploy or Get Out!” policy, which goes into effect October 1, orders the Pentagon to deny people living with HIV from enlisting in the Armed Forces. It also deems current soldiers living with HIV “non-deployable”, then orders the Pentagon to discharge anyone who is unable to be deployed outside of the country for longer than 12 consecutive months.

Now, two separate lawsuits, Harrison v. Mattis and Doe v. Mattis, are challenging the new policy, which Defense Secretary Jim Mattis says is to promote “readiness” within the Armed Forces, but which many others see as a thinly-veiled attempt at a government-sponsored HIV purge within the U.S. military.

These service members are being denied significant career advancement opportunities or threatened with discharge due to President Trump’s new “Deploy or Get Out!” policy.

Left unaddressed, hundreds of service members who are otherwise fit for duty, including named-plaintiff Sgt. Nick Harrison, will be discharged from the military, suffer irrevocable harm to their careers, and lose critical health care and other benefits.

41-year-old Sgt. Nick Harrison says soldiers living with HIV should not be denied the opportunity to serve their country.

“This case is not just about me,” he says. “This is about every person living with HIV knowing that they can perform any job in the world, including serving in the military.”

Harrison adds, “I look forward to the day that I can serve my country to the full extent of my abilities, based on my performance and unfettered by unfounded fears and misperceptions about HIV.”

In addition to potentially losing his health care and other benefits, Harrison says the new policy blocks soldiers living with HIV from achieving officer status.

“Soldiers, sailors, fighter pilots and marines are seeing their promising careers cut short, their dreams of service shattered and their health jeopardized due to antiquated notions about HIV and the stigma that results,” says Scott Schoettes, Counsel and HIV Project Director at Lambda Legal.

It’s estimated the futures of around 1,200 service members are now on the line.

Related: Trump’s trans military ban has everything to do with his proposed Mexican border wall