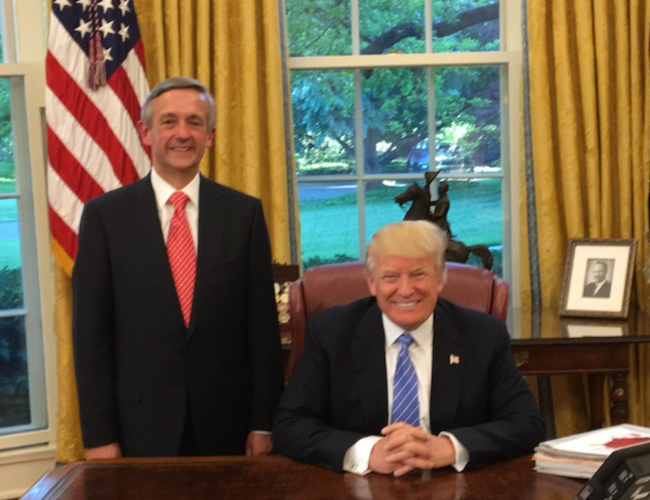 A quick refresher on Jeffress for those who may not be familiar with his work: His views are so extreme, even Mitt Romney has publicly condemned him.

The assiduously antigay preacher believes gays, Jews, Muslims, and Mormons are all going to hell and that Obama was in league with Satan.

As Right Wing Watch reports, he believes “perverse” gays and lesbians are either child molesters, or highly likely to abuse children in the future. He’s compared gay sex with bestiality and called it “a miserable lifestyle.”

Leaving no cliche unturned, he believes gays use “brainwashing techniques” to have homosexuality “crammed down our throats.

And gay people “are engaged in the most detestable, unclean, abominable acts you can imagine.” In due time, the “filthy practice” of gay sex “will pave the way for that future world dictator, the Antichrist” and lead to an “implosion of our country.”

During the meal, Jeffress said the people in the room are going to be Trump’s “most loyal” and “enthusiastic supporters, and we thank God every day that you’re the president of the United States.”