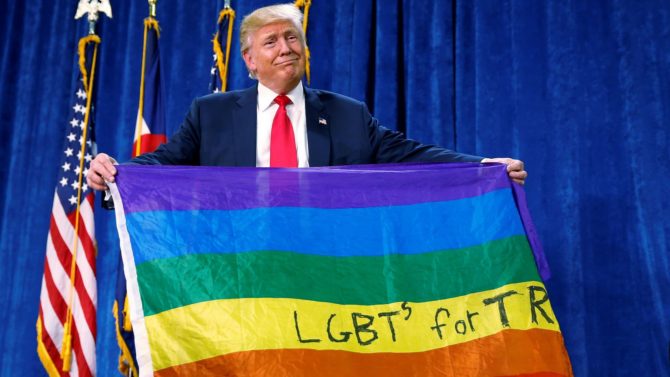 Amid rumors that President Trump was readying an executive order to roll back some workplace protections gained by gay, lesbian, bisexual and transgender people under Obama, the White House has said no change will be made in that specific area.

In a statement issued by the White House, Trump’s record on gay rights was strongly played up.

Here they are laying it on thick:

“President Trump continues to be respectful and supportive of L.G.B.T.Q. rights, just as he was throughout the election,” the statement said. “The president is proud to have been the first ever G.O.P. nominee to mention the L.G.B.T.Q. community in his nomination acceptance speech, pledging then to protect the community from violence and oppression.”

The 2014 order banned companies that do business with the federal government from discriminating on the basis of sexual orientation or gender identity, marking the first time in history the government explicitly protected workers from the latter.

The decision to leave the order intact, the statement said, was Trump’s.

Less clear is whether Trump will put forth any other executive actions that affect the LGBT community negatively. So-called “religious liberty” provisions could allow widespread discrimination, and for that reason alone, it’s vital the public holds the President’s feet to the fire.

While Trump has consistently opposed marriage equality, he has said his view is “irrelevant” as the law has been settled by the courts. However, he has stated that on issues like abortion, the law is less iron clad. One of his first actions as president was to ban any federal funding to international health organizations that perform or provide information on abortions.

With a Supreme Court nomination expected Tuesday, both issues have the potential to take center stage.

It’s tough to really chalk this up as a victory when, as HRC president Chad Griffin said, “LGBTQ refugees, immigrants, Muslims and women are scared today, and with good reason.”