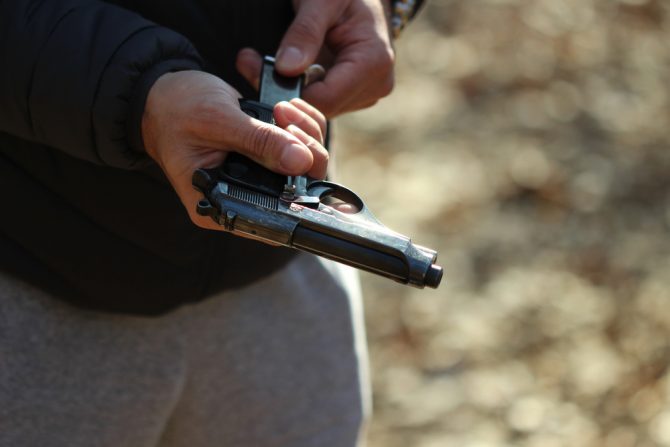 A member of a homoerotic pro-Trump Facebook group where straight guys share photos of themselves pointing loaded guns at their genitals in an attempt to “trigger liberals” has accidentally shot himself in the balls.

The unidentified San Diego man belongs to the private group “Loaded Guns Pointed at [B]enis.” He recently posted a video of himself pointing his .45-caliber M1911 semiautomatic at his groin.

There’s a brief pause in the video before the gun suddenly fires and blood splatters everywhere.

Now these MAGA dolts are pointing guns at their dicks with the safeties off and their fingers on the trigger to own the libs. I fucking hate it here. pic.twitter.com/O1vVUldLn5

The original video of the man shooting himself in the balls and subsequent thread has been deleted, but members of the group captured the video and aftermath and reuploaded it.

“Hey [b]ois, I might have f*cked up,” the man who shot himself in the balls wrote above a picture of his naked legs and splattered blood on the carpet of his floor. A towel is stuffed between his legs and a printed out copy of the constitution is crumpled on the edge of the photo.

The guy posted through the incident as he bled. “God’s caliber [.45] went through my scrotum, mattress, boxspring, and floor,” he wrote.

The man later posted a photo of himself in the hospital pointing his finger towards his crotch like a gun.

“Turns out it wasn’t a graze, that round went right the f*ck through me,” he captioned the photo. “What I thought were two graze wounds, turned out to be an entrance and exit wound.”

An admin for “Loaded Guns Pointed at [B]enis” says the man is doing “100% OK” now and has already returned to work, adding that he doesn’t think he “needs to be chastised” for shooting his own balls in the name of Trump.

“I’m quite sure he’s learned his lesson without the entire world calling him an idiot,” the admin said.

Has he? Has he really though?

Related: This sinking boat at a Trump boat parade is another perfect metaphor for 2020