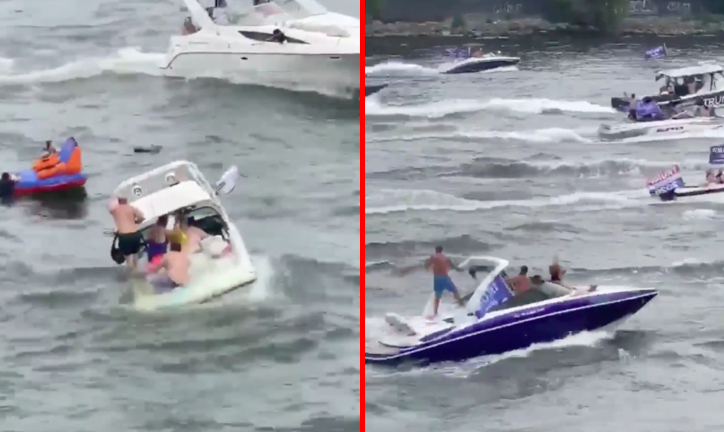 A bunch of idiotic Trump supporters gathered in Portland, Oregon over the weekend for a Trump 2020 boat parade along the Willamette River. But things didn’t quite go as planned.

Viral video shows dozens of boats with Trump flags and other MAGA signage creating large wakes as they tear down the river blowing fog horns. The video then cuts to a smaller boat quickly taking on water after being swamped by the wake.

“Help us! Help us, please,” a woman can be heard screaming from the sinking vessel as others rush to assist.

Related: Trump campaign bus crashing into dump truck with Mike Pence on board is the perfect metaphor for 2020

River Patrol marine deputies were called but by the time they arrived, the people on board had already been rescued. No injuries were reported.

As it turns out, the sinking boat was not actually a part of the parade.

According to Buzzfeed, the people on board were just out enjoying a summer afternoon on the water when the parade came barreling through, creating large wakes in a no-wake zone, and turning the otherwise calm river into a “torrential storm-like atmosphere.”

Trump supporters breaking the rules, not giving a crap about anyone else, and leaving nothing but chaos and destruction in their wake? Yeah, that sounds about right.

Trump boat parade overtakes the Willamette River in Portland, OR and sinks nearby families boat ? pic.twitter.com/RMZbHHFuFW