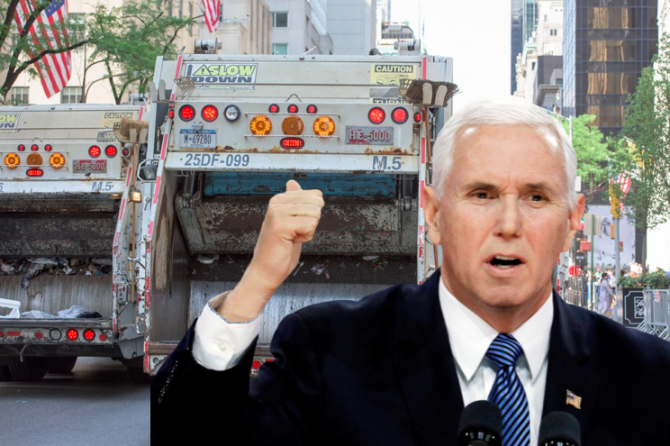 Because sometimes the universe has a sense of humor, this morning Trump’s campaign bus crashed into a dump truck in Pennsylvania. Not only that, but Mike Pence was on board.

The minor collision happened when the campaign bus swiped the dump truck, denting in the fender. Pence, who was on his way to a “Cops for Trump” rally, was not injured, but he did have to be transferred into a limo.

As the motorcade continued on its way, it was delayed a second time when two motorcycle cops went down. Pence, not wearing a mask, got out of the limo to speak with the officers. Emergency medical personnel arrived shortly thereafter.

.@VP Pence “tour bus has been involved in a minor accident with a dump truck on the way to a campaign stop outside of Pittsburgh.”https://t.co/oTYtcF9ZqY pic.twitter.com/4LgGlMvhWn

Pence eventually made it to the “Cops for Trump” rally, where he gave a racially-coded and uninspiring speech to a small crowd of almost all white people.

The Trump campaign sent Pence to Pennsylvania this week in an effort to drum up support in the critical battleground state. A recent RealClearPolitics found that Biden leads Trump there by six points.

Here’s what Twitter is saying about this morning’s crash…

Mike Pence’s motorcade hit a dump truck. You can’t make this shit up.

The jokes just write themselves.

Things are getting serious. Dump trucks are notorious for this kind of thing/wetwork

Give it time they will blame the Democrats for that

God is punishing them already. 🙏

It is like the start of an assassination movie

Was Hillary in Pennsylvania that day? pic.twitter.com/ImprcT9dVu

Is the dump truck okay?