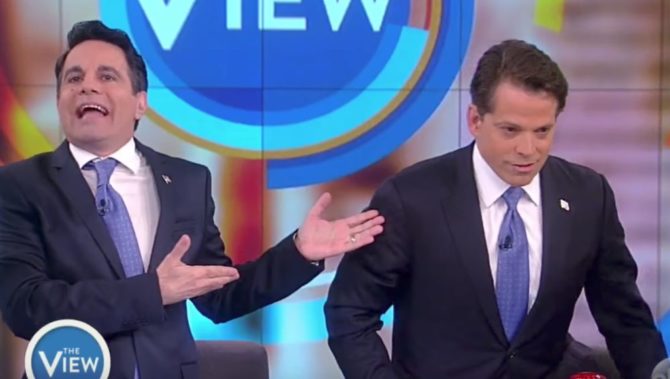 Of all the odd footnotes of the Trump Administration so far, Anthony “the Mooch” Scaramucci, press secretary for about eight seconds, has to be the oddest.

Still, he’s milking it for all its worth.

That being said, it isn’t worth much, as evidenced by this somewhat uncomfortable appearance he made recently on The View.

Joy Behar asked Mooch if he prefers being impersonated by Bill Hader or out comic and Sex and the City actor Mario Cantone, and he indicated his choice is Cantone. Then out walked Cantone as the spitting image of the Mooch.

The Mooch does his best to play along, and we’re sure the whole thing was staged, but the undercurrent of annoyance is pretty easy to pick up on.

He even tried to read Cantone, asking “How bummed were you when I got fired? You were on your way, and then you got shot down like a little bird.”

Related: These Anthony ‘I don’t suck my own c*ck’ Scaramucci memes are hilarious

Cantone instantly replied, “You got nothing. Spicer got the Emmys and you’re sitting here with four bleeding-heart chiacchierones.”

Call Me By Your Name director defends casting straight actors