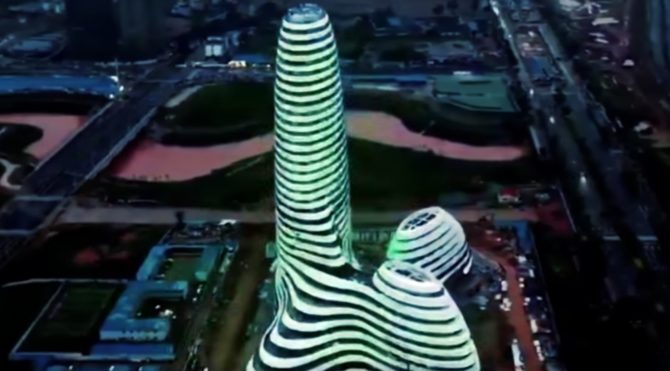 The United Kingdom has its Gherkin, the United States has its “Brick D*ck,” and now China has a phallic building to call its own.

The Guangxi New Media Center is a recently-completed skyscraper that was designed the resemble the terraced slopes of the Guangxi and Yunnan provinces’ rice paddies, as Shanghaiist reports.

But social media users are seeing something else entirely (and the two ball-shaped structures at the base of the tower certainly don’t discourage the comparisons).

The architect who designed this really had balls. https://t.co/BOv7HwOOWs

Concerns have been raised about the Guangxi New Media Center… surely an official organ of the Chinese state. pic.twitter.com/0LB1S2kfhu

To make matters worse, a recently-uploaded video shows streams of fireworks shooting out of the tip of the tower in celebration of the Mid-Autumn celebration.

A spokesperson for the Guangxi Broadcasting and Television Network Company, however, claimed the viral clip is a fake. “We turned on the lights on the facade of the building and it showed the image of a moon,” the rep said, per Daily Mail. “Some [web users] Photoshopped extra lights, others Photoshopped fireworks and fountains onto it. All sorts of things.”

All of that said, Twitter user @shimengzhou makes a valid point: “Which skyscraper does NOT look like a massive penis shooting out of the ground?”