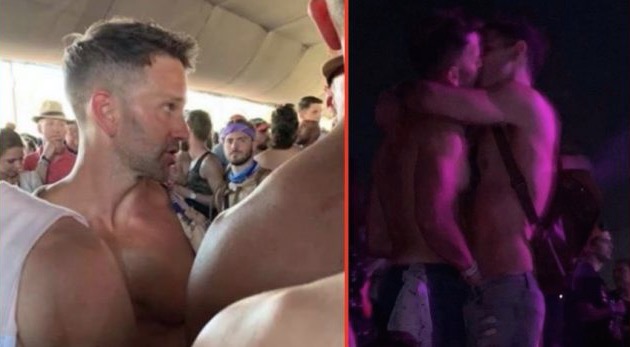 Yesterday, Queerty broke the news that former GOP Congressman Aaron Schock was purportedly photographed at Coachella hanging out with a bunch of shirtless white gays and making out with a dude whilst reaching his hand down the guy’s pants.

As you may recall, while serving as the United States Representative for Illinois’ 18th congressional district from 2009 until 2015, Schock’s voting record read like the CliffsNotes of the Religious Right’s antigay playbook.

Among his political positions, he voted against adding “sexual orientation, gender identity, gender and disability” to the federal hate crime protection groups, against the repeal of Don’t Ask, Don’t Tell,’and for the Defense of Marriage Act, which defined marriage as between a man and a woman.

His vehemently homophobic politics at one time earned him a 0 percent approval rating from the Human Rights Campaign for his opposition to LGBTQ equality.

While it is the position of Queerty not to out public figures, we make one serious exception when someone has actively hurt LGBTQ people or causes and refused to own up to it.

Former GOP congressman Aaron Schock, who always voted against LGBTQ rights, was seen making out with a guy at Coachella. The only surprise is that anyone would ever kiss a Republican#AaronSchock

Me waiting for the think pieces on how Aaron Schock shouldn’t be “outed” as a private citizen even though when he was in public office he used his powers to hurt private citizens pic.twitter.com/DWBFzZb4IA

Aaron Schock is just an Instagay with legal bills…

A personification group photo of “no fats, no fems, no asians” and yes the short one is Aaron Schock #puke ? pic.twitter.com/hIPX3FeYFl

New rule: any one of y’all caught kissing Aaron Schock will have your membership cards revoked and shunned. #BrunchDenied

Of course Aaron Schock was at Coachella with his hand down a guy’s pants while making out.

I’ve appreciated people saying the group of gays he was with need to hold him accountable for his vehimently anti-LGBTQ votes in Congress. But, repeat after me: WHITE GAYS ARE WHITE FIRST

Everyone should be allowed the time and space to come out as who they authentically after the proper amount of self reflection and the chance to align with supportive communities.

But not Aaron Schock. Fuck that guy.

Isn’t Coachella mainly run by a homophobe who donates to Republican politicians? Maybe it’s the perfect place for Aaron Schock to be.

#AaronSchock is an excellent example of gay whiteness. Voted against our rights & now all hugged up with Instagays at Coachella. The Gays associated with them should also be suspect. These types are the worst within our community pic.twitter.com/emd8EEGyfs

We reached out to Schock for comment. Not surprisingly, we still haven’t heard back.