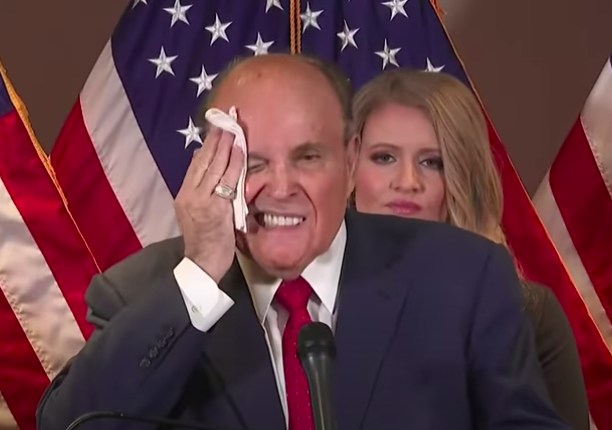 You’ve likely heard by now that Rudy Giuliani gave a sweaty, fact-free, 90-minute press conference yesterday, during which he hair and face literally melted off his head as he quoted from the film My Cousin Vinny while making baseless claims about voter fraud.

Anderson Cooper was being polite when he called the whole thing “pathetic,” a “hot mess,” and a “clown show” last night.

“It wasn’t a press conference. It was a clown show.” pic.twitter.com/nOIZ8Li9E6

Here’s what others have been saying about it...

I can’t stop looking at the dual rivulets of dye running down Rudy Giuliani’s cheeks and thinking, like the Wicked Witch, Trump’s defense along with his presidency is melting.

Rudy Guilliani having a little problem with hair dye dripping down his face. Priceless! pic.twitter.com/wqxvkS624m

Thought it was a remake of Death in Venice #RudyGiuliani pic.twitter.com/olqWg7qVMM

Seeing cheeto-faced @RealDonaldTrump and his slimy henchman @RudyGiuliani literally melting down as they lose bigly over and over again is my new favourite thing.

Maybe he keeps his hair dye in his pants. #RudyGiuliani pic.twitter.com/Alnkp5gzwv

Things that will never not be funny to me:
1. Four Seasons Total Landscaping
2. Rudy Guilliani’s hair dye dripping down his face

You can’t unsee/unhear Rudy Giuliani melting into black liquid as he says My Cousin Vinny is his favorite “law movie” of all time.

Dude looks like a villain in his final hours from some dystopic art-house film about cloning political figures to preserve their immortality #RudyGiuliani #TrumpCollapse pic.twitter.com/mxTko9lK3G

I just found this exclusive footage of #RudyGuilliani after his press conference pic.twitter.com/LbM2JaN7WU

Is Rudy Guilliani melting for the hundredth time really newsworthy?

The answer is yes.

Related: WATCH: Rudy Giuliani just melted during a press conference. So did his make-up.