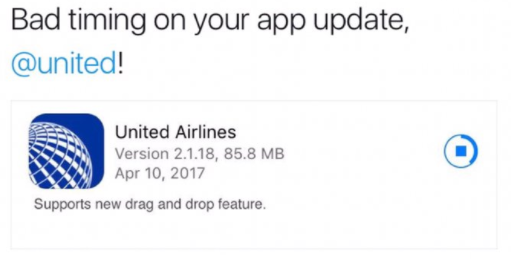 Somewhere behind a desk at United Airlines’ public relations firm is a junior associate who thought she was going to have an easy week.

While the airline scrambles into damage control mode over a video of a doctor being forcibly dragged off his overbooked flight out of Chicago, basically everyone else remains fairly shocked and disturbed by the incident.

Naturally, the Twitterverse is doing what it does best in times of bizarre public blunders.

Here’s a look at some of the finest digs:

Well that's awkward. Less than a month ago, #UnitedAirlines CEO was named "Communicator of the Year" by @PRWeek Magazine. #boycottunited pic.twitter.com/cqKAwULGr1

"And in that moment, #UnitedAirlines became presidential."
-history

When your @united flight is over booked. #UnitedAirlines #flight3411 pic.twitter.com/X7e8OidVyH

If you can't seat them, beat them. #NewUnitedAirlinesMottos #unitedAIRLINES

When the Megazord is overbooked and #unitedairlines wants you off pic.twitter.com/v0YBVffl62

"The Captain and crew welcome you aboard this morning's #unitedAIRLINES flight…" pic.twitter.com/A58zFy6eWg

But the prize may go to Jimmy Kimmel’s “honest United commercial” that aired last night:

Me on that United flight: YES MAMA DRAG HERRRRRRR. pic.twitter.com/BDDidpBVGM