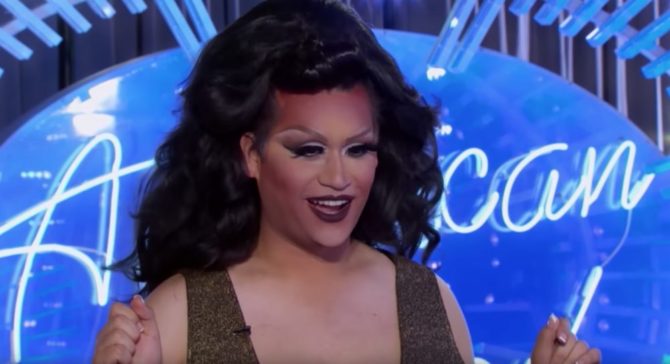 When  19-year-old Adam Sanders auditioned for American Idol back in 2013, the experience took a serious toll on him. Five years later, Sanders has auditioned again, but this time as his drag alter ego, Ada Vox.

And what a difference those five years have made.

Related: “Stranger Things” star wore a G-string and danced to ’80s hits for his audition

Ada brings her confidence, her TV-ready story of personal growth, and most importantly, her serious pipes into the audition room. And she nails it.

In a segment preceding the audition, Sanders talks candidly about making it to the top 50 in 2013. After being eliminated he was met with a barrage of personal attacks from strangers online, who went after his weight and his talent, ultimately chipping away at his self-worth.

Related: Watch This Drag Queen Amaze The Judges During The ‘Australia’s Got Talent’ Auditions

“It killed me inside,” he says. “It killed me almost as much as the people who were telling me that I should kill myself.”

“Through all of the negativity, I have managed to build myself up as a new person, as a stronger person,” he continues. “I have recreated myself in ways I could not have imagined.”

“We’ve had a lot of artists come on here, talented, but a bit confused. What you are giving us is a clear understanding of who you are, coming in with an amazing amount of talent.”