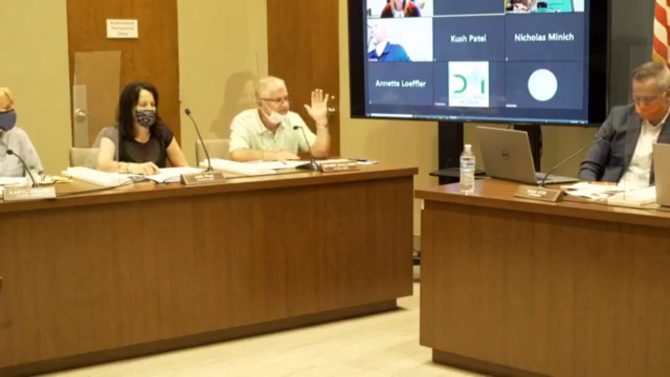 Roger Galloway, a city councilman from LaPorte, Indiana, has issued an apology following outrage over remarks he made during a city council meeting. In a tense exchange, Galloway slammed queer people and criticized Black Lives Matter.

The NWI Times reports that the comments came while the council heard a request from a city resident for increased funding and resources devoted to LGBTQ visibility.

“LGB, like you’re talking gay people, stuff like that, right?” Galloway asked of the resident. “Do you know that’s against the Bible?” he said. “Anybody ever read the Bible?”

Later in the meeting, when the subject of Black Lives Matter came up, Galloway had another outburst. “I was in Vietnam,” he boasted. “I don’t care if they were purple. We fought for each other. We took care of each other. You have Black Lives Matters. How ’bout the Hispanics, the Asians, the white people? We’re all here. I still don’t understand. Of course I’m 70 years old, but uh, let’s wake up and take care of everybody in our community. Our whole country. I don’t understand Black Lives Matters, I probably never will but it’s for all of us, Okay? That’s my comment.”

Galloway’s comments brought immediate backlash, starting with criticism from Tom Dermody, mayor of LaPorte. “The things said at last night’s City Council meeting are unacceptable,” he said. “These comments are not reflective of the goals we have for the future of LaPorte, nor are they representative of our city government team as a whole. We want our community to be a place that is welcoming to all and will continue working hard to ensure that is the case.”

Alexandria Masepohl, the citizen appealing for increased resources for the queer community, also pushed back against Galloway saying his remarks illustrated her point.”He beautifully demonstrated the need for city education,” she said.

Following the backlash, Galloway backpedaled his comments. “LaPorte is a welcoming community, and my remarks did not reflect that,” he admitted. “My personal opinions and beliefs should never get in the way of my ability to represent our community as a whole. The LGBTQ representatives from the meeting have agreed to meet with me in the coming days. I am grateful for their willingness to have a conversation so I can learn more and develop a better understanding.”