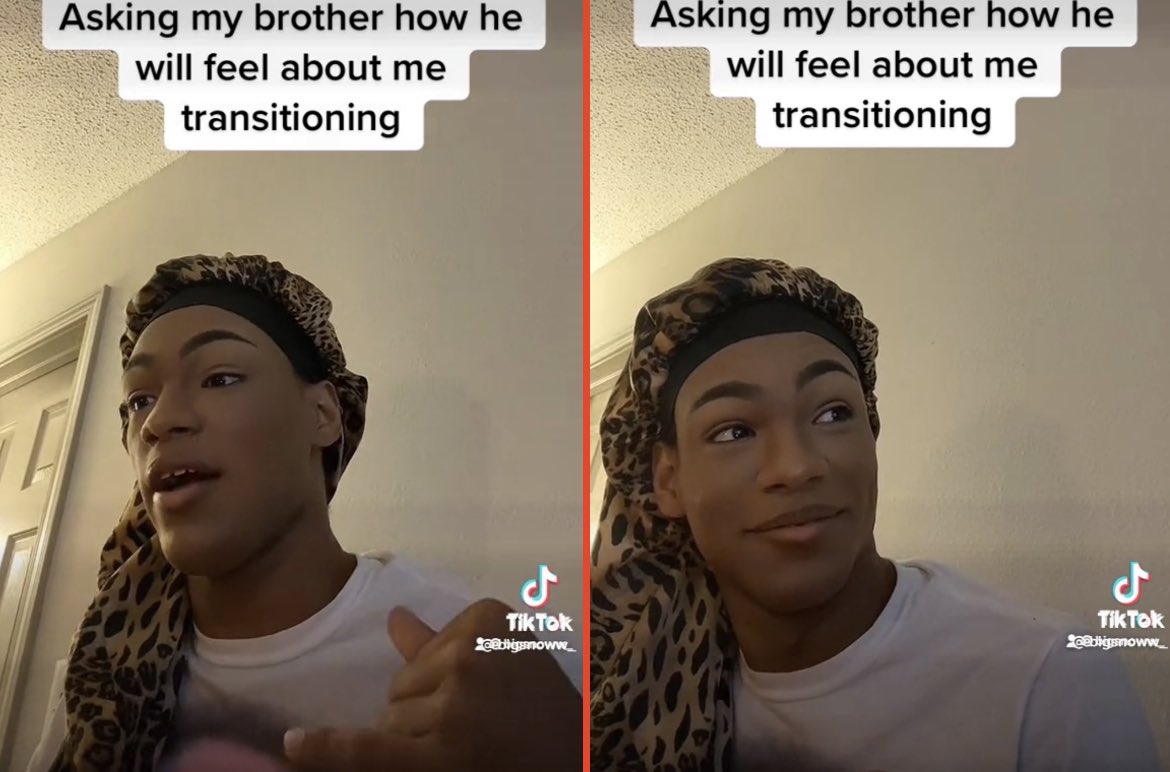 20-year-old creative @bigsnoww_ went viral on TikTok this week with the feel-good video that we all need right now.

The stylist/personality/graphic designer has had her share of views in the past, but this recent video has racked up an incredible 1.3 million and counting.

In the clip, she comes out to her 9-year-old brother as trans and explains how she feels in terms she knows he can understand.

What starts as confusion ends with nothing but love:

She starts with asking if he knows what “transgender” means, before asking how he would feel if she were trans.

“What?! I would be confused as heck!” he replies. “You’re a boy who wanted to transgender into a girl? That would make me confused.”

She patiently poses, “What if I don’t feel right in this gender? What if I’m sad in this gender and would be happy another gender?”

“That would be good for you,” he says, already starting to get it.

After about a minute more back and forth of him coming around, she asks, “Would you still love me the same?” In a response quicker than any in the video so far, he immediately says yes.

“Would you still be confused?” she asks.

“No,” he says, “because you already told me what you feel like.”

And that’s that. One simple discussion, and he went from being confused by his “brother” to accepting his sister in about 90 seconds.

The video has garnered an outpouring of love and support, with many people praising her patience and communication in a conversation that many assume is almost too difficult to have.

“I LOVE that you let him process that!” one commenter writes. “You didn’t demand that he be okay with it. Letting him admit his confusion was beautiful.”

“Both of y’all did so good,” writes another. “You didn’t minimize his confusion and he actually thought about how you feel and wasn’t confused in the end. I love this.”

Related: This CBS Morning correspondent’s new unlikely friendship is the smile we all need today

Conversations like this are especially important to see in today’s climate, as politicians and right-wing mouthpieces attempt to distance the queer community from young people entirely.

We currently face laws targeting the discussion of queerness in schools, protests getting LGBTQ+ materials taken off library shelves, and even attempts to criminalize drag around kids.

Meanwhile, real human moments like this video show that kids can be as understanding as their loved ones teach them to be.