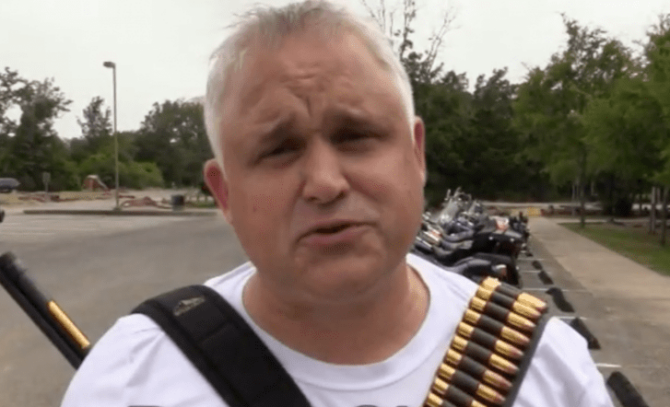 Just weeks after the mass school shooting in Uvalde, Bryan Slaton of the Texas House of Representatives has announced intent to file a bold new ban to protect Texas’ children. Not a ban on assault weapons, of course; Slaton has proposed a ban on drag shows in any proximity to minors.

Slaton, who has been endorsed by the NRA and Gun Owners of America, is doing his best to make sure Texas voters focus on queer performers rather than the gun violence that’s been terrorizing their children’s schools.

Drag shows are no place for a child.

I would never take my children to a drag show and I know Speaker Dade Phelan and my Republican colleagues wouldn’t either.

I will be filing legislation to address this issue in the new #txlege . pic.twitter.com/R7NkX7ADBR

In fact, conservatives hand-wrung all weekend on Twitter over the horrible deviant threat that these people in wigs and heels pose by lip-syncing to Britney Spears songs. One recent appalling instance saw children at a drag queen-led kids’ event — and you may want to brace yourself for this — playing musical chairs.

Children are now playing musical chairs for the audience pic.twitter.com/fghzTVamGn

The Christian right may want to hold their horses on the grooming allegations until their constant, unending stream of sexual abuses at least slows down.

Slaton has a history of worrying about the wrong thing. In the past he’s filed to have abortion classified as homicide for both the person receiving it and the person performing it, a crime which in Texas can be punishable by death.

Related: Abortion, trans rights, now this: Texas is dead set on being the worst state ever

On top of it all, it’s unclear what the parameters of this legislation would entail as of yet. After all, what constitutes a drag show? Is it just any queen performing anywhere? And what would it mean for minors who dabble in drag themselves? God forbid a 17-year-old boy slap on a lash and some drugstore blush, lest Bryan fire up the electric chair.

Watch below to see some of the horrid things drag exposes children to (a.k.a. an adult in a colorful outfit reading kids fun stories in public with parental consent).