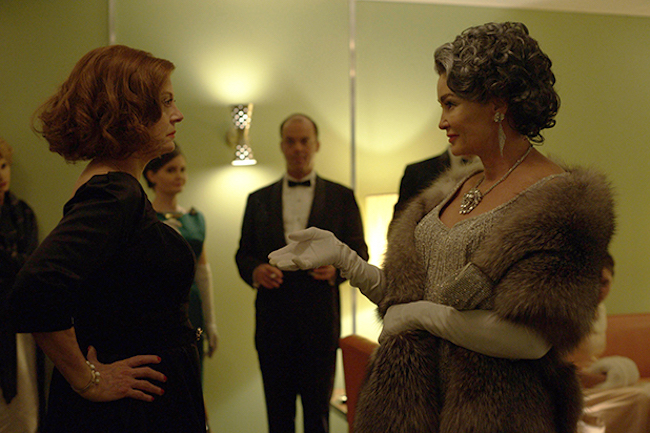 Leave it to Ryan Murphy, lover of all things queer, soapy and classic Hollywood, to come up with a show about two gay icons locked in bitter battle. Feud fictionalizes the very real rivalry between Bette Davis and Joan Crawford, co-stars of Whatever Happened to Baby Jane. The show focuses on the production and aftermath of the seminal thriller, and how appearing in the cooky horror film affected both their careers. Oscar winners Susan Sarandon and Jessica Lange, as Davis & Crawford, respectively, remind viewers of why they became megastars in their own right, while Judy Davis steals her scenes as gossip columnist Hedda Hopper. Alfred Molina also gives a wonderful turn as Baby Jane director Robert Aldrich, a man just trying to make his movie whilst caught in a clash of the titans.

At its best, Feud explores the machinations of classic Hollywood and empathizes with classic stars–women, in particular–tossed off by the studio establishment. It also meditates on the pressure actors feel to be celebrities, and to air their private lives in public. The show softens its two leading players considerably–Crawford’s well-documented abuse of her children is barely addressed, while Davis’ grudging cruelty to her costars is toned down considerably from the historical record. For those familiar with the real-life Crawford and Davis, as well as their rivalry, the show’s final, semi-sweet resolution will likely feel hollow and tacked on. Still, a lush production and all-star cast which also includes Stanley Tucci, Catherine Zeta-Jones, Kathy Bates, Kiernan Shipka and Sarah Paulson make Fued a load of fun to watch. We recommend it as a Hollywood fantasy, with more than a few gay winks to boot.