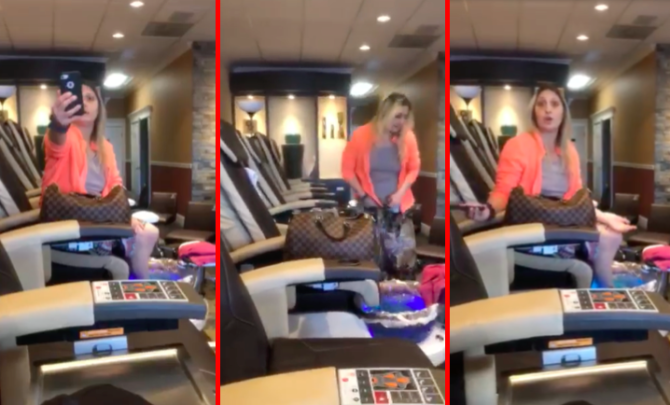 All Christopher Brown wanted was to enjoy a nice mani-pedi after the craziness of the holidays. Instead, he was verbally assaulted by a woman wearing an ankle-length floral dress and in dire need of a dye job.

The incident happened on December 30 at Casabella Spa & Nails in Lynnwood, Washington. It all started when Brown allegedly asked the woman if she could please turn her cellphone off loudspeaker. That’s when she launched into a vile homophobic rant.

The video, which was posted on Facebook last week and has since garnered nearly 200K views, shows the woman threatening to call 9-1-1 and repeatedly calling Brown a “f*ggot, sissy, queer” and claiming that he’s jealous of her having a “p*ssy.”

The woman, whose identity has not been released, also insists the staff kick out Brown, saying: “It’s either him or me!”

Brown says he uploaded the video because he wanted people to see the sort of discrimination and mistreatment many LGBTQ people in America still face on a daily basis.

“Please take a minute to view and share this, and know that even in the Seattle region, life isn’t always sunshine and rainbows for the LGBT community,” he writes.

“I hope her family and friends see this one day, and are embarrassed by her despicable behavior. There is still work to do folks. #resist”

I’ve been holding back sharing this, but what kind of social justice warrior would I be staying quiet?This situation occurred at my favorite foot spa in Lynnwood, Washington. After this lady storms in the place to talk down to the receptionist, she proceeds to pick out her color at the color pallets wall. After berating another staff member for the selection not being what she wanted, she selects the chair next to me for her pedicure experience.Lucky me. She then proceeds to engage in a FaceTime dialogue with her daughter about the latest drama from school. At this point, the staff are irritated as well as the patrons.Being the outspoken gent that I am, I say “mam, would you kindly mind taking your phone off speaker in the spa, pointing to the signs asking patrons to keep their noise down.She looks at her FaceTime call and goes “hold on, I need to take care of this faggot”.And at this moment I was able to record:Please take a minute to view and share this, and know that even in the Seattle region, life isn’t always sunshine and rainbows for the lgbt community. I hope her family and friends see this one day, and are embarrassed by her despicable behavior. There is still work to do folks. #resist