“Keep it snappy, keep it happy, keep it gay!” wrote Mel Brooks in the Tony Award-winning musical The Producers. Theater creators have taken that to heart — and while “happy” isn’t always the predominant theme, there’s a wealth of queer-themed works to be found on Broadway and beyond. Queerty takes a look at some of the best plays, musicals, and variety shows to check out this holiday season.

The Tony Award-winning revival of Take Me Out, starring Jesse Williams and Jesse Tyler Ferguson, returns for an encore run on Broadway. The reboot also features a hot new DILF that has audiences clamoring to the Hayes Theater, along with that now-famous shower scene that broke the internet. Beyond the allure of naked actor-athletes, Richard Greenberg’s Pulitzer-nominated play takes a hard and thoughtful look at LGBTQ representation in professional sports. (Through February 3, 2023)

Michael R. Jackson’s A Strange Loop was a decade in the making, but when it finally arrived on Broadway this spring, it won the hearts of critics and audiences alike. The groundbreaking musical follows Usher as his thoughts come to life while he attempts to write the next great American musical while also tackling big themes like systemic racism, religion, and HIV. (Through January 15, 2023)

The latest jukebox musical features a familiar score thanks to hits by producer-songwriter Max Martin, who’s worked with our favorite musical icons (Adam Lambert, Britney Spears, and Pink, to name a few), along with a clever book by Schitt’s Creek writer and executive producer David West Read. The musical conjures what might happen if Juliet had survived that fateful night with Romeo, including a secondary love story with her nonbinary best friend, May (Justin David Sullivan). & Juliet also includes our favorite line of the season, when Shakespeare’s wife, Anne Hathaway (Betsy Wolfe), puts her hubby in his place, saying, “Do you really think it’s up to you to question May’s gender or sexuality, or do you think maybe May is whoever May is, and it’s really none of your business?” (Open-ended run)

While not a major plot point, the charming Greek chorus of four high schoolers discovering their sexual identities subtly informs Jeanine Tesori (Fun Home) and David Linsday Abaire’s heartwarming Broadway musical about a teenager (Victoria Clark) with a degenerative disease in which she ages at four times the average rate. Navigating a broken home and a new crush (Justin Cooley), Kimberly defies expectation — and so do her classmates by portraying a trauma-free portrait of growing up queer. (Open-ended run)

Austin McCormick’s Company XIV — a scintillating troupe of dance, burlesque, baroque, and magic — returns with its perennial favorite. This naughty riff on The Nutcracker delivers scantily clad versions of our favorite characters, set in Company XIV’s speakeasy-style venue in Bushwick, Brooklyn. For those looking to double the fun, McCormick recently opened a second space, gorgeously designed by longtime collaborator Zane Pihlström. Cocktail Magique doesn’t come cheap, but if you’re looking for a wholly unique evening of magic and libations, look no further than this self-described “royal court of sumptuous opulence.” (Through January 29, 2023)

A Man of No Importance

Jim Parsons stars as Alfie Burns, a closeted gay man obsessed with mounting a production of Oscar Wilde’s Salome with the local amateur theater troupe. The Off-Broadway musical revival features a score by Stephen Flaherty and Lynn Ahrens (Ragtime, Once On This Island), painting a tender picture of 1960s Dublin. Parsons’ soft-spoken charm unveils the musical’s primary theme: the struggle for self-acceptance that still resonates among many queer folks today. (Through December 18, 2022)

The Golden Girls: The Lost Episodes, The Obligatory Holiday Special

Hell in a Handbag Productions returns with a world premiere homage to our favorite quartet (besides The Old Gays, of course!). Dorothy, Rose, Blanche, and Sophia’s holidays take an unexpected turn when they discover that Shady Pines Retirement Community is on the verge of closing — leaving many of Sophia’s friends homeless for the holidays. Will the Girls save the day? And will Rose reach St. Olaf in time for the Herring Bowl Parade? (Through December 30, 2022)

Jack Off the Beanstalk

Chicago’s PrideArts reimagines the pantomime for adult audiences with its naughty riff on the classic fairy tale. Written by Thom Whalley, one of Britain’s leading panto artists, the musical features popular songs, a four-piece band, and unexpected twists and turns. Jack and his mother, Dame Trott, live in the shadow of a dreadful giant and, with rent past due, must sell their beloved cow. The evil henchman Fleshlight tricks them into selling the cow for worthless beans, then kidnaps a princess for the giant’s supper. Fortunately, Fairy Hanny shows up to lend a helping hand. (Through December 18, 2022)

Jingle All the Gay! 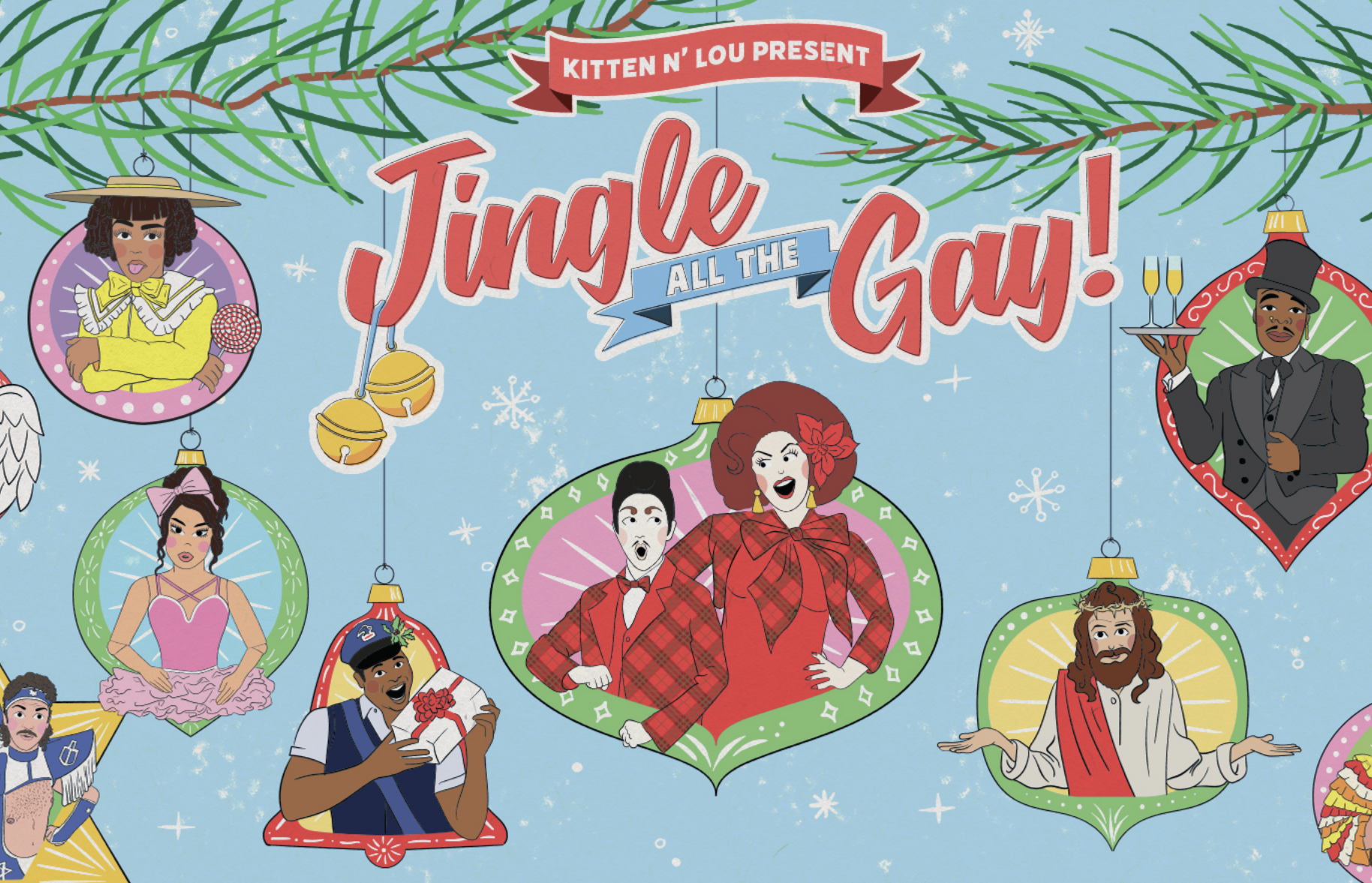 After a decade of Homo For the Holidays, Seattle’s Kitten N’ Lou returns with a new seasonal spectacle — Jingle All the Gay! The evening of burlesque, cabaret, dance, drag and musical luminaries gathers some of Seattle’s best. (December 2-18, 2022)

The Jinkx and Dela Holiday Show

While the following shows aren’t necessarily queer-themed, current productions feature a rare chance to see some of our favorite LGBTQ actors on stage.

Tony winner Matt Doyle (Company) leads the Off-Broadway revival of Little Shop of Horrors, about a plant with an unconventional appetite. (Open-ended run)

Merrily We Roll Along

Sondheim fans are freaking out over the Merrily We Roll Along revival at New York Theater Workshop, starring Jonathan Groff (soon to appear on screen in Knock at the Cabin), Daniel Radcliffe, and Lindsay Mendez. (Through January 21, 2023)

Death of a Salesman

A powerful revival of Arthur Miller’s Death of a Salesman sets the play during the Great Migration, casting the Lohmans as an African American family. Even more powerful is the three generations of Black queer actors — André De Shields, Sharon D Clarke, and McKinley Belcher III — that star in it, alongside a powerhouse performance by Wendell Pierce in the title role. (Through January 15, 2023)

The birth of our country is seen through a fresh lens in Diane Paulus and Jeffrey L. Page’s reimaging of 1776. A multiracial cast of female, transgender, and nonbinary actors portrays our founding fathers, culminating in a harrowing final tableau that hits home the generational racism still plaguing our country. (Through January 8, 2023)