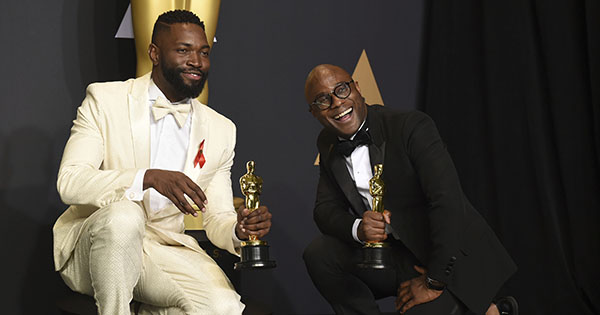 2017 Academy Awards are a wrap, and despite a dearth of openly gay men and women in front of the camera, queer folk hoping for advancement in the annals of film history can now rejoice. La La Land managed to take home five Oscars, only to be thwarted by the surprise win of Moonlight for best picture. Moonlight also awards for Supporting Actor and Best Adapted Screenplay for director Barry Jenkins and original writer Tyrell McCraney, the queer writer who penned the original play.

Trump’s anti-immigration stance, hostility towards LGBTQ folk and otherwise general nincompoopery proved the greatest fodder for Jimmy Kimmel, who delighted attendees with candy and cookies descending from the ceiling via tiny parachutes. The sweetest rewards, however, veiled or otherwise, came at Trump’s expense.

Anti-Trump rhetoric also captured serious moments as well. This became most obvious when it was revealed that Ashgar Farad, Iranian director of Best Foreign Language film The Salesman, could not attend because of Trump’s anti-immigration measures. A powerful statement by read by  friend Anousheh Ansari expressed his rage and disgust that the man occupying the Oval Office, in the most powerful nation on the planet, should compromise American values with such contempt for diversity.

Even marketers got the queer memo. While ABC advertised their forthcoming mini-series When We Rise, a chronicle of the movement, companies like Google and Revlon ran ads featuring same-sex couples and openly gay celebrities.

Though the Oscars still suffer a dearth of gay actors taking home gold, considering that not long ago to the queer community could not even get a mention at the Academy Awards–or just about anywhere else–we’ve come a a long, long way. But with Trump’s ugly administration hanging over the nation, the night also made clear how far we still have to go.