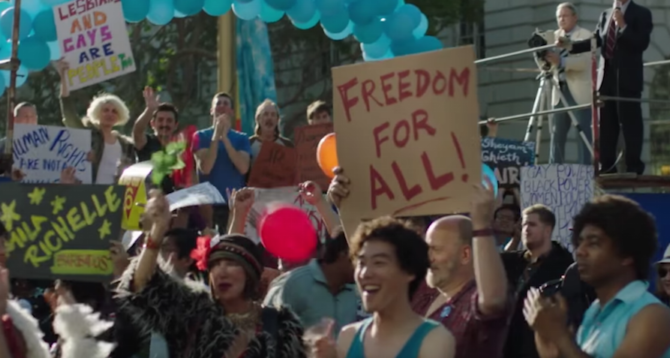 President Donald Trump trumps LGBTQ rights when it comes to prime-time on ABC. The network announced that because House Speaker Paul Ryan has invited the president to deliver his first address to Congress on February 28th, it will shift its scheduled miniseries, “When We Rise,” so it can instead televise the speech that will be seen on every other network.

The miniseries, depicting the decades-long struggle by a group of LGBTQ Americans for equality, debuts on Monday, February 27 at 9 p.m. EST, 8 p.m. Central. Instead of presenting the second night of “When We Rise” on Tuesday, ABC will interrupt its lineup to join CBS, NBC, FOX, CNN, MSNBC, C-SPAN, the Spanish language networks and countless radio stations and webstreams to bring Trump’s address live to its viewers.

Prior to ABC’s scheduling change, Black said during a press event that he thinks Trump might find his series worth watching.

Related: Dustin Lance Black says ‘When We Rise’ under attack from alt-right but even Trump will like it

“If Donald Trump actually watches the show, he might like the show,” Black said, adding that Trump voters may get a lot out of it, too. And as Variety reported, thanks to ABC, now they won’t have to miss any of it.

“I don’t see this show as trying to speak to only half of the country — I didn’t write the show for half the country.” Black said he wrote it with his own kind in mind: a Christian, Southern, military family.

Watch the trailer for “When We Rise” below: