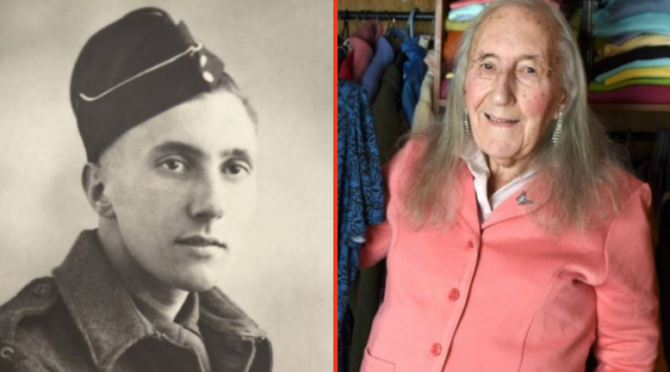 It’s usually a good idea to listen to the life lessons any World War II vet feels like sharing, but Patricia Davies has a story that simply needs to be heard.

At the age of 90, Davies decided to follow through on a feeling she’s had her entire life — she’s transgender and finally ready to live it.

Davies, who was born Peter, says she’s known her true gender since she was just a toddler.

“I’ve known I was transgender since I was 3 years old. I knew a girl called Patricia, and I decided I wanted to be known by that name but it didn’t stick,” Davies told Caters News Agency.

While we’ve still got a long way to go towards fully embracing our trans brothers and sisters, Davies’ reasons for keeping her feelings secret are shocking by today’s standards. She faced a community that would either shun her (a terrible predicament that still persists) or at worst subject her to horrifying “treatments” like shock therapy.

“The atmosphere [around being transgender] was not safe. People did not understand what transgender was,” Davies said.

Then there was her military service between April 1945 and 1948 — coming out as trans would mean being classified as a homosexual, which was certainly not allowed in the army.

“I feel quite proud having served during the war and having done military service, in particular during the trouble in Palestine,” said Davies.

Davies married young at the age of 21 — a convention of the times — and in 1987 came out to her wife. Even in the mid ’80s this could have been disastrous, but her wife was supportive, even buying Davies women’s clothing and jewelry to try on privately at home. The two were married for an awe-inspiring 67 years until Davie’s wife passed in 2010.

“I was 60 when it all came pouring out to my wife, she was very sympathetic and helped me all the way, but we agreed to keep it quiet,” said Davies, who first discovered what a trans life could be from a TV show in the ’70s.

Davies suffered some harassment when she first donned heels out in public — teenagers threw eggs at her window, as awful teenagers are like to do.

But now there’s nothing that will stop her from living her truth. She’s started taking estrogen to propel her transition and has come out to the world.

“It feels like a weight has been lifted off my shoulders. I was living a lie,” she told Caters.

“I have been keeping quiet. I have slowly started to tell some of my neighbors. Everybody said, ‘Don’t worry, as long as you’re happy.’”

Seeing positive portrayals of trans identities in films and TV shows made a huge impact on Patricia’s decision to cast off her fear.

“It’s not 100 percent safe now but it’s much better than it was. People that I have told seem to be very accommodating and haven’t thrown abuse at me,” she said.

“I joined the Women’s Institute. I socialize with them and have a natter [long chat]. I’m having a great time. I have a new lease on life,” she added.