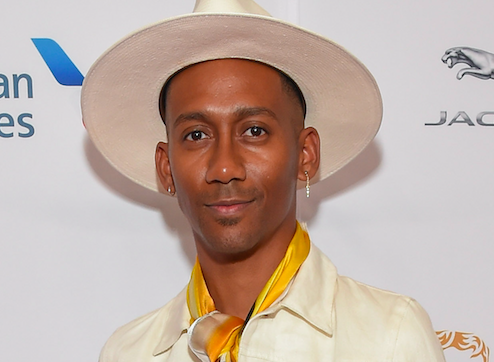 “See, the thing about Amy Cooper is that she’s a liberal,” Matthews said. “She works with Black people, she believes she loves Black people. Her Black experience is strictly about money and profits. She has no real Black friends and has never needed to have them because that’s not part of the equation of rising to the pinnacle of success on Broadway. Think about that.”

Matthews asserted that racism at its core is about that personal, as well as systemic, exploitative power dynamic. And there it is.

Matthews, who has also appeared on the TV shows Dear White People and The Flight Attendant, later spoke with Advocate about growing up Black, gay and closeted, having to navigate playing “butchness” in acting roles, regardless of the character’s sexuality and the joy of finally getting to play feminine gay characters.

Unfortunately, this is a huge obstacle for many queer male entertainers to this day. In the interview, he also mentioned an arrested development he experienced in his 20s and the pressure that exists to perform masculinity and conform to an ideal even when the cameras aren’t rolling.

In addition to speaking openly about the issues the affect queer Black men, Matthews is the founder of UgandaProject, a nonprofit organization that sponsors the education of orphans living in Uganda. His humanitarian work there also served as the inspiration for a musical he wrote with his now-husband called Witness Uganda (and later re-titled Invisible Thread) that premiered Off-Broadway in 2015.

He also uses his Instagram platform to raise awareness to the issues he cares most about. In March, he mention it had been one year since Breonna Taylor was murdered by Jonathan Mattingly, Brett Hankison, and Myles Cosgrove of Louisville Metro police department without seeing justice. More recently, he made a heartfelt post titled #StartAsianLove to counteract the increase in violence Asian communities have faced since the start of the pandemic.

Matthews gives us pride because he isn’t afraid to speak out against things like systemic racism and inequality, even when it could have a harmful impact on his career, and because he celebrates uses his voice to educate and to stand in solidarity with other marginalized communities.

Scroll down for some pics from Matthews’ Instagram page…