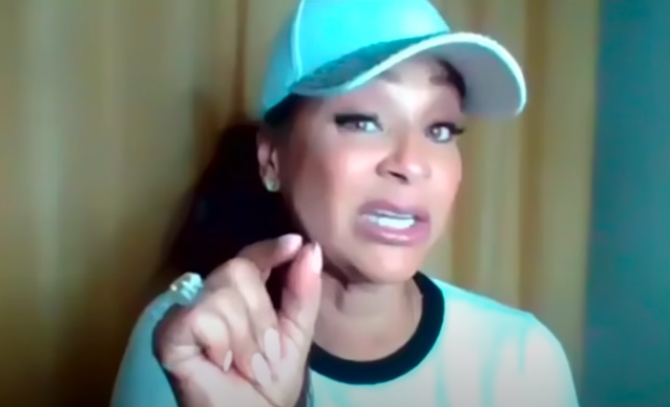 During a recent episode of the web series Cocktails With Queens, actress LisaRaye McCoy made some truly vile remarks about bisexual men, including labeling them “suspects” and calling for them to be outed.

McCoy was speaking with co-hosts Claudia Jordan, Syleena Johnson, and Vivica A. Fox about Andrew Gillum, the former Florida Democratic gubernatorial candidate who came out as bisexual in an interview with Tamron Hall this week.

McCoy began by suggesting Gillum would have been better off staying in the closet forever.

“You know what? I just, I think it’s so unfortunate because when you get busted, you know, and then you’re just forced to come on out with it, and it’s almost like he could’ve pleaded the fifth still,” the Single Ladies actress said.

Then she suggested he’s not really bisexual, he’s actually gay.

“Now he’s gotta come on out and say, well, you know what, I’m not completely completely gay, I’m just bi,” she said, prompting all the other women on the panel to burst out laughing.

Related: The response to Andrew Gillum is exactly why so many bisexuals still struggle with coming out

Then Fox, who has quite a long history of homophobia, did something surprising. She spoke out in support of sexual fluidity, saying it’s “the world we are living in.”

“People are fluid,” she remarked. “They are not afraid to love who they might want to that night, baby.”

Seconds later, however, Fox went on to demonize men who mislead women into thinking they are “over here and then you come to find out they’re on both sides.” To which, McCoy responded by saying, “They gotta be outed! They gotta be busted!”

McCoy then said women can test to see if their boyfriends and husbands are gay by “using your finger a little bit.” If the men react positively, Raye implied, it means they’re homosexual. To which the panel once again responded by erupting into laughter.

Things took another turn for the worst a little while after that when Jordan asked if any of the women had ever dated men they thought might be gay or bisexual, to which McCoy stated that she had and “he’s still a suspect.”

“It ain’t came out, you know, but I’ve been hearing it in the business,” she remarked. “People told me. When we were even together people would look at us sideways and I didn’t know who they was looking at harder, me or him.”