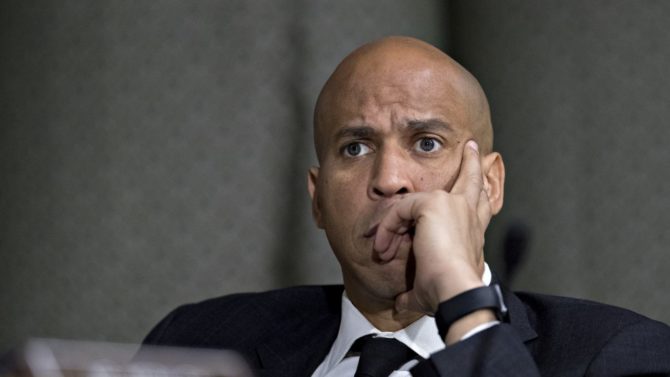 Sen. Cory Booker has found himself the subject of a  gay sex rumors fueled by right wing nuts on social media.

The accusations were made on Twitter by an anonymous person claiming to be a “liberal, gay man” who alleges Booker sexually assaulted him in a workplace bathroom in 2014, shortly after Booker was elected to the US Senate.

#CoryBooker Sexually Assaulted Me
and why it won't matter to the #metoo movement. https://t.co/8VQuMGY8bj pic.twitter.com/D5DWnFmfzd

The lengthy accusation is incredibly detailed and reads almost like a bad grocery store romance novel:

I stopped to use one of the building’s single-occupancy restrooms. Upon washing my hands prior to leaving, I hear knocking on the door. When it comes to these restrooms, it is customary to knock first in case someone is using it, even though there is an inner lock. When I opened the door, Mr. Booker was there.

After exchanging polite “idle chitchat” the man says Booker yanked him into the bathroom, pushed him up against and wall, and said, “Being a hero was a serious turn-on. The Senate appreciates fine citizens like you. Especially this senator.”

He then put his left hand on my groin, over my jeans, and began to rub. I seem to remember saying something like “What is happening?” It was a bit like having vertigo. He then used his other hand to grab my left hand with his right and pulled it over to touch him. At the same time, he disengaged from rubbing me and used his left hand to push me to my knees from my shoulder for what was clearly a move to have me perform oral sex on him.

The man says as a result of the attack he’s been through “2 jobs, 3 therapists, and one suicide attempt.” He also claims he tried reaching out to Ronan Farrow, who he calls “the father of the #MeToo movement”, but Farrow never returned his call, which he seems rather bitter about:

When Ronan Farrow’s cause was born, it was beautiful and innocent. Unfortunately, shortly thereafter, it was C-List actress Alyssa Milano who named it, appropriating the movement by Tarana Burke. And it was ideologues like Milano who nurtured it and gave it a PC framework. The ‘me’ in #metoo had become a preferred pronoun for liberal women accusing conservatives. And #IBelieveHer became #metoo’s new nickname.

Not surprisingly, internet trolls, including Donald Trump Jr., have latched onto the story and are now calling for Booker to resign immediately:

Based on @CoryBooker’s rules when it comes to due process for accused sexual assaulters, we must assume he’s guilty until he proves otherwise by calling for an FBI investigation into himself. I assume he won’t be running for president until that investigation is complete.

In a trial, yes, he deserves that presumption. But what if we view this as a job interview, to see if @CoryBooker is qualified for public office? #KarmaIsABitch https://t.co/aT4SKYvivs

Hey Cory, are you seriously going to ignore your assault allegations on a gay man from only four years ago? Clearly detailed exactly in time, place? Thought so. #BathroomBooker

Uh oh. Spartacus, we have a problem. @CoryBooker is a sexual predator. He's guilty too. No trial needed. No evidence needed. You're guilty of sexually assaulting this man. You must resign now. #MeToo
https://t.co/NErmujEihW

Regardless of which side of the aisle you are on, mainstream media’s refusal to cover the allegations against @CoryBooker are a problem. If you disagree then you are part of the problem. #BathroomBooker #hypocrisy

Booker has yet to issue any comment on the allegations.