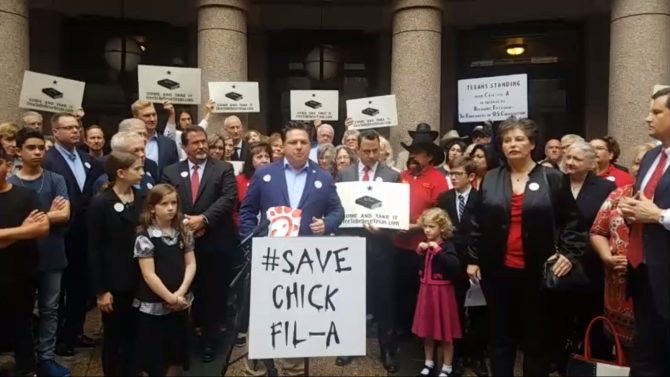 A Texas, a grassroots Christian group called Texas Values launched a campaign to overturn a measure passed by the city of San Antonio to ban notoriously homophobic fast-food chain Chick-fil-A from the San Antonio Airport.

The group launched their efforts, declaring April 17 “Save Chick-fil-A Day.” They also declared support for a pair of bills in the Texas legislature that would allow for discrimination based on sexual orientation and gender identity, particularly where it pertained to marriage.

“If there’s a couple of things that are certainly clear in Texas, it’s that you don’t mess with Chick-fil-A, and you don’t mess with religious freedom,” said group president Johnathan Saenz in a press conference at the Texas Capitol. Saenz also released a video with Sen. Ted Cruz via the Texas Values website. Predictably, it claimed that LGBTQ equality and protections from discrimination are tantamount to religious persecution.

The queer community in Texas would not let the protests over Chick-fil-A or the pending legislative bills go unanswered. “LGBTQ Texas are vital members of every community in Texas, and deserve the same opportunities as everyone else, to live, work, and contribute to this state,” declared Samantha Smoot, Interim Executive Director of Equality Texas. “But these most basic rights are again under attack in the Texas legislature. Under the leadership of Dan Patrick, the Senate has already passed, as of last night now, five anti-LGBT bills.”

Activist Alison Roth Weigel echoed Smoot, albeit in more pointed terms. “One of my fears is that the language that’s being used in a lot of this legislation defines biological sex as binary and immutable, which basically writes me out of existence in the eyes of Texas law,” she said in a video posted to Twitter. “I’m here to just remind people that I exist, and I’m a living, breathing human being staring them here in the face. I will be here each and every time to fight legislation that seeks to erase people like me. We’re not going anywhere.”

Chick-fil-A has encountered similar blowback at other airports and college campuses for its perceived homophobia. After voting to allow a Chick-fil-A to open in the San Jose airport, city officials also mandated the inclusion of Pride Flags to make the location “the gayest in the country.”

We are STILL at the Capitol tonight for a long night of hearings. Some bills define sex as binary and immutable. This worries intersex activist @xoxy_alicia who refuses to be written out of existence. #LGBTQ #intersex #TXlege #wontbeerased pic.twitter.com/NF1HDi3CwH