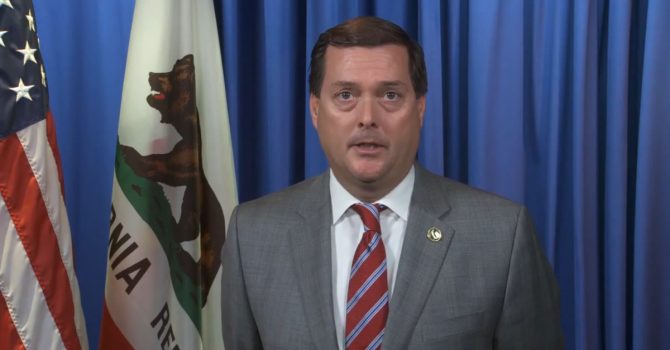 A state office in California tasked with investigating sexual harassment complaints against local lawmakers has concluded that Orange County Assemblyman Bill Brough did, indeed, make unwanted sexual advances towards several of his colleagues.

Brough, whose voting record includes opposing a ban on gay conversion therapy and opposing gender neural bathrooms, and who doesn’t believe “nonbinary” is a gender, has been accused of propositioning multiple female colleagues on numerous occasions. Not only that, but he allegedly promised one woman political favors in exchange for sex.

The allegations were first made over a year ago, when Orange County Supervisor Lisa Bartlett, along with three other women, came forward to accuse Brough of making multiple aggressive, unwanted advances towards them over an eight year period.

The first alleged incident happened back in 2011, when Brough cornered a colleague after a work dinner, forcefully grabbed her by the shoulders, and said, “Let’s get a drink and do something!”

Another alleged incident happened a few years after that. It involved Brough running his hand down a colleague’s bare leg during a happy hour event. While caressing her skirt line, Brough asked if he could go back to the accuser’s house.

And yet another alleged incident involved Brough putting his hand on the small of a woman’s back and promising to provide “political help” if she went back to his apartment with him.

53-year-old Brough, who is married and has two children, has denied everything and insists the allegations against him are politically motivated.

“It is unfortunate that this has become a very politically driven, weaponized process, which will have negative ramifications for not only those that are falsely accused, but for those with legitimate claims as well as,” he said in a statement.

Brough went on to say that he’s more than willing to go through whatever sensitivity training is required to prove he’s a nice guy who would never harass anyone. Then he offered an apology to “my family, friends and supporters for putting them through this unfair process.”

But the Assembly Rules Committee, as well as Brough’s Republican colleagues, didn’t buy his apology. This week, he was stripped of his committee assignments.

The Republican Party of Orange County, which initially endorsed Brough for reelection, has also revoked its support of him. And California Republican Party Chairwoman Jessica Millan Patterson put out a statement noting that the GOP didn’t support his bid for a fourth term.

While his political future seems all but dead, Brough’s legal troubles are only just beginning.

The California Ethics Commission recently announced it was opening an investigation into Brough for alleged misuse of campaign funds after he purportedly used $200,000 of campaign contributions to pay for his family’s personal cell phone bills, dinners at expensive restaurants, and a trip to a Boston Red Sox game.