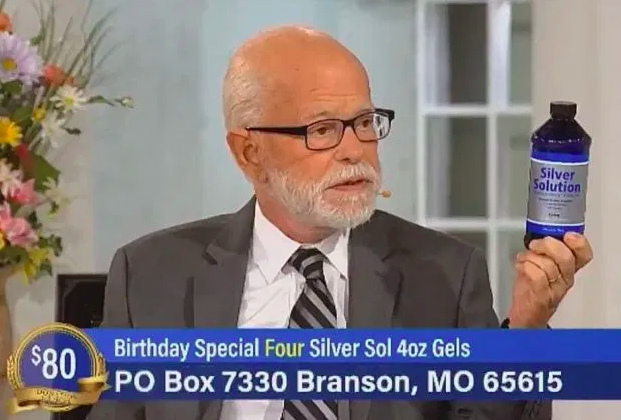 For years, televangelist/convicted fraudster Jim Bakker, the former husband of Tammy Faye Bakker, has made his living by spewing homophobic vitriol and other nonsense to thousands of people every Sunday morning.

Recently, to supplement his income, the 80-year-old began promoting “Silver Solution,” a fake medicine that he claims can cure the coronavirus.

And Missouri Attorney General Eric Schmitt has filed a lawsuit against him seeking a restraining order and permanent injunction barring him from selling the $80 product.

The FDA has been quite clear that “no vaccines, pills, potions or other prescription or over-the-counter products treat or cure coronavirus disease.”

For the past two decades, the FDA’s message has been clear: Silver doesn’t work to combat serious diseases. Over-the-counter drugs that contain colloidal silver ingredients “are not generally recognized as safe and effective,” it says. According to the National Institutes of Health, very little evidence backs up the health-related claims of silver. “Colloidal silver can be dangerous to your health,” the NIH says.

But this didn’t stop Bakker, who claims to be a “naturopathic doctor,” from plugging Silver Solution on his show anyway.

“This influenza that is now circling the globe,” he said during the February 12 broadcast of The Jim Bakker Show. “You’re saying that Silver Solution would be effective.”

This isn’t Bakker’s first run in with the law either. In 1989, he was found guilty of 24 counts of defrauding followers from his South Carolina-based ministry.