The gay romance Call Me By Your Name has proven itself to be a critical darling.

But some have condemned the film’s central relationship, which is between a 17-year-old named Elio and a 20-something professor named Oliver.

Armie Hammer, who portrays the latter, says it’s all about context.

“We weren’t trying to make some salacious, predatory movie,” he tells The Hollywood Reporter.

‘The age of consent in Italy is 14,” he says. “So, to get technical, it’s not illegal there. Whether I agree with that or not, that’s a whole ‘nother Oprah, you know?”

“Would it make me uncomfortable if I had a 17-year-old child dating someone in their mid-20s? Probably.

But this isn’t a normal situation: The younger guy goes after the older guy. The dynamic is not older predator versus younger boy.”

In the book. the characters are 17 and 24, respectively. Meanwhile, Hammer is 31-years-old in real life, and Timothée Chalamet is 21.

Related: Armie Hammer was ‘terrified’ before filming gay sex scenes in “Call Me By Your Name”

Back in September, malignant veteran actor James Woods lashed out at the film, saying the subject matter was “quietly chip[ping] away at the last barriers of decency. 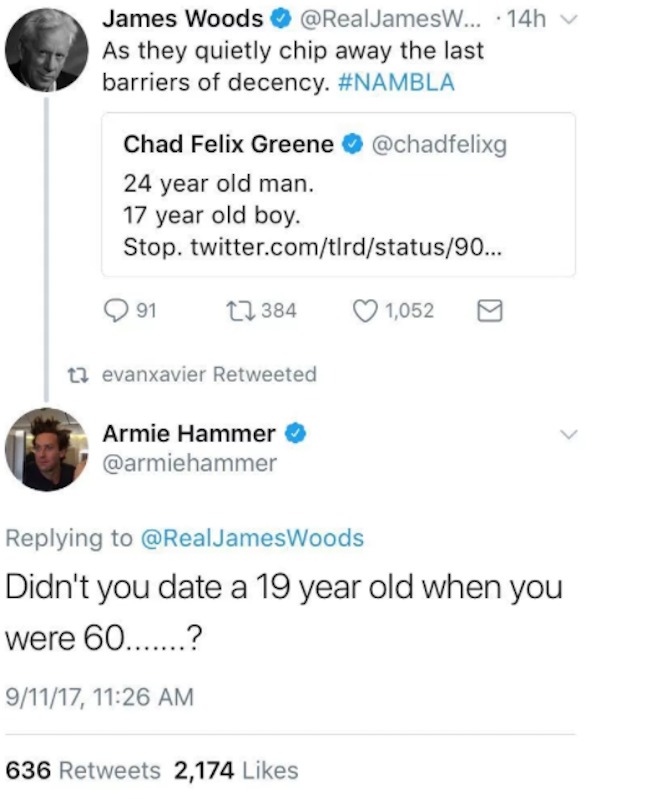