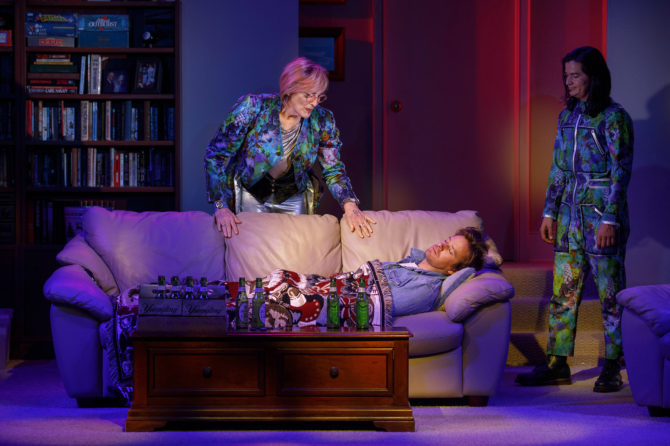 Tickets to Broadways shows are anything but cheap, which makes it all the more baffling that someone would willingly purchase one only to heckle a performer with transphobic drivel.

But that’s what happened at a performance of Straight White Men this week, and the cast is speaking out against the terribly rude disruption.

Among the show’s cast are Call Me By Your Name star Armie Hammer and trans performer and activist Kate Bornstein.

It was when the latter delivered the opening line of the play — “Good evening, ladies, gentlemen, and the rest of us” — when a woman in the audience yelled, “You’re not welcome here.”

The woman and her husband also reportedly booed throughout the show and were never removed from the theater.

Bornstein addressed the incident in a Facebook post, saying the woman “could not have been more wrong.” 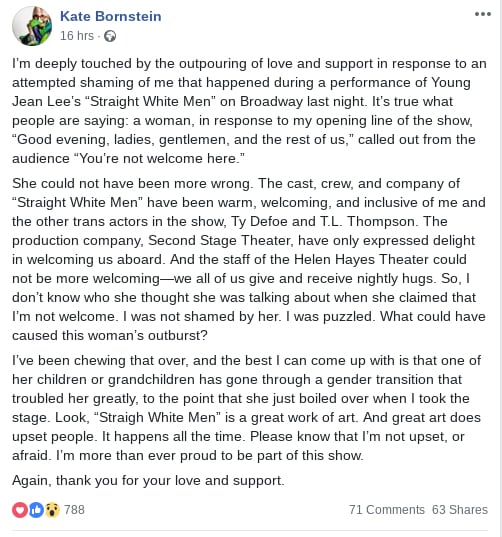 Related: And the the 10 hottest chorus boys on Broadway are…

Armie Hammer also took to Twitter to offer this message to the unruly audience member:

To the woman in our audience who felt it was appropriate to yell, “You’re not welcome here!” at Kate Bornstein, our beloved friend, co-worker, and now family member….. feel free never to come back.

In response to Hammer’s tweet, another audience member who was seated near the woman provided some details:

Was sitting right behind her and her husband – they were also both booing loudly. It was terrible, and they didn’t get kicked out, but all of us around her told her too STFU. They were in row 4 center isle seats 6 and 7. ?

This led to a back-and-forth with the actor:

Do you know their exact seat numbers?

I was Row E Seat 104. She was in Row D Seat 105. Ppl around us thought it was part of the show at 1st, couldn’t believe what was happening. Ppl did tell her to shut up rather loudly. You were all genius, It sucks this happened and tried to overshadow the entire msg of the play.

Thank you… will pass this along to the appropriate people at the theater.