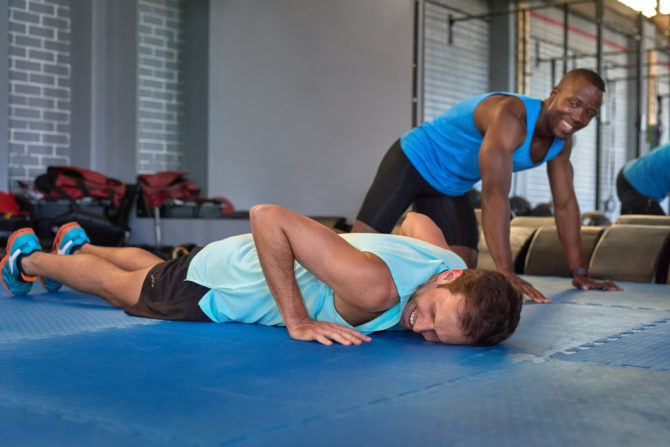 A bi-curious man says he’s ready to make the plunge into the man pond, he’s even found the guy he wants to do it with, but he isn’t sure how to broach the subject with him, so he’s seeking help from advice guru Dr. Nerdlove.

“I’m in my mid-20s, bisexual and have graduated college,” the man’s letter begins. “It’s worth noting early on despite being bisexual I’ve never been with a guy.”

At least, not yet.

The man explains that throughout college he only ever hooked up with women, though he was always curious about what it might be like to sleep with a dude. After graduating, he decided to join Grindr.

“I took up Grindr again and met someone there,” he writes. “We’ve started going to the gym together and have quickly become friends.”

Related: More Locker Room Confessions To Make You Renew That Gym Membership… Or Cancel It

He continues, “I don’t think he’s looking for anything more than that, but I’m kind of tempted to ask him if he wants to do some sexy things. … I don’t know how he’ll react because he seems pretty conservative.”

Dude, if you met on Grindr, we can assure you he’s not that conservative.

“I feel confused because I have this whole side to my sexuality I’m desperate to explore,” he says, “but I’m worried I’ll damage my relationships if I try to push it.”

He wonders: “Would it be potentially harmful to ask this friend to do things with me? Should I just pour some cold water on myself?”

In his response, Dr. Nerdlove tells the guy if he’s into his gym buddy then he needs to avoid falling into what he calls “The Friend Zone.”

The Friend Zone is simply people who just don’t want to f*ck you, for whatever reason. It may be that they’re not interested in you, sexually or romantically. It may be that they’re not in a place where they feel like being sexual with anyone. They may well have been up for it at one time, but that time has passed and now that interest has passed.

To avoid this, he says, the man needs to “make sure you act like a potential lover, not a friend.”

“Most people end up throwing away their shot because they’re too afraid of being rejected,” he explains.

You met on Grinder — a site that’s primarily about no-strings attached hook-ups — and never actually, y’know. Hooked up. That’s not to say you can’t find friends or even FWBs on there, but your actions are telling the guy that you’re not into him sexually.

The question is, Dr. Nerdlove says, can that be turned around? There’s only one way to find out.

Related: Guys share why they really do at the gym (Spoiler alert: It’s not just fitness)

Dr. Nerdlove writes, “Let him know that you appreciate his friendship, that you’re interested in maybe a bit more and it’s totally ok if he’s not down with that. And then let it go. Ball’s in his court.”

What do you think this guy should do? Should he risk a great friendship by hitting on the guy, or would it be better to look for someone else to give his V-card to? Share your words of wisdom in the comments…