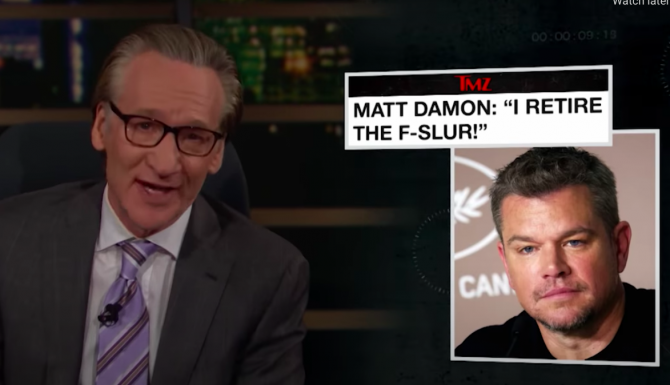 According to Bill Maher, it’s OK to use antigay slurs so long as you identify as liberal, have a clean water charity, and deliver food to Haiti.

The 65-year-old recently went to bat for Matt Damon, saying the actor is currently “flailing around in cancel culture quicksand” after admitting to using the “f-slur for a homosexual” up until just a few months ago when his daughter informed him it was homophobic.

“Okay, he was late to the party,” Maher said on Real Time with Bill Maher. “To which we could say, ‘Welcome, glad you could make it. Or we could say, ‘You came later than I did. Die’.”

As far as we know, nobody has called for Matt Damon to die. They’re just not willing to applaud a 50-year-old man for deciding to retire an antigay slur from his vocabulary in the year 2021 because his daughter told him he should.

Maher went on to say Damon is “one of the most likeable guys in Hollywood, with impeccable liberal credentials” and yet “he is always getting pulled over by the woke police.”

“Really?” he said, incredulously. “He’s got a clean water charity and delivers food to Haiti.”

He also said teenage boys use the word all the time “when they meet up at Chipotle” and that it’s “not always meant as a slur.”

“There are too many people in this country motivated not by what they really believe, but by what will get Twitter to react to them with likes and retweets,” the HBO host continued. “Matt Damon isn’t a terrible person, he’s just ignorant.”

Last week, Damon issued a statement that read, in part:

I have learned that eradicating prejudice requires active movement toward justice rather than finding passive comfort in imagining myself ‘one of the good guys’. And given that open hostility against the LGBTQ+ community is still not uncommon, I understand why my statement led many to assume the worst. To be as clear as I can be, I stand with the LGBTQ+ community.

Watch Maher’s defense of Damon below. Or don’t.