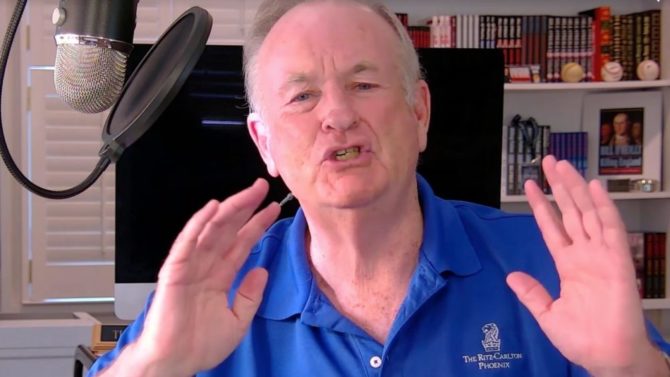 To make a long story short: Over the weekend, The New York Times dropped a bombshell report that, way back in January, O’Reilly agreed to pay $32 million to settle a sexual harassment lawsuit filed against him by FOX News legal analyst, Lis Wiehl. Wiehl had appeared on O’Reilly’s show for more than 15 years. She accused the 68-year-old cable news host of doing all sorts of inappropriate things.

Although the deal has not been previously made public, the network’s parent company, 21st Century Fox, acknowledges that it was aware of the woman’s complaints about Mr. O’Reilly. They included allegations of repeated harassment, a nonconsensual sexual relationship and the sending of gay pornography and other sexually explicit material to her, according to the people briefed on the matter.

OK, let’s pause right there and take a closer look at that last sentence, the part about “the sending of gay pornography and other sexually explicit material.”

This is a man who once said gay marriage would result in increases in “chaos,” polygamy, and incest, and called discrimination protections for LGBTQ students “madness” and “anarchy.”

We’re not the only ones who took notice of this minor detail in The Times’ report. Folks on Twitter are also curious about O’Reilly’s surprising taste in adult entertainment:

The Times also reported that the $32 million settlement was reached in January and that in February, 21st Century Fox offered O’Reilly a four-year, $100 million ($25 million per year) contract extension.

When confronted about this, the company said it considered the situation between O’Reilly and Wiehl “a personal matter between both parties.” Never mind that both parties were co-workers and that much of the alleged harassment happened at work.

So, yeah. Execs totally planned to keep O’Reilly on at the network. That is until last April, when it was revealed he was involved in not just one sexual harassment lawsuit, but five, all involving women with whom he worked. An outcry ensued, leading advertisers to flee, and, ultimately, O’Reilly’s firing.