The Irish actor Allen Leech is known for his role as Tom the hot working-class chauffeur on Downton Abbey. Which may be why he is oddly calm and articulate even while stuck in LA traffic when he calls to answer my questions about Bohemian Rhapsody, the biopic of Queen singer Freddie Mercury that opens tonight in a theater near you.

That the finished film shows no signs of the behind-the-scenes chaos could have stymied the production. (Director Bryan Singer was let go shortly before the film was finished.) Instead, it offers a well-crafted, entertaining look at a rock icon and his personal life set to some of rock’s most unforgettable anthems.

Leech passed some time in traffic by chatting with Queerty about his character, Freddie Mercury, and his next big project.

It looks like you’re going to have a big hit on your hands. How did the project come to you?

It came to me through Suzie Figgis, the casting director in the UK. Originally, I sat down and did a Skype with her and the whole production team for the role of Jim Hutton [Freddie Mercury’s late boyfriend] played by Aaron McCusker. I did that chat with the whole team, went away, and it seemed like the job went away. When I read the script—I had been brought up on the music of Queen. My father is a huge Queen fan.

So I really, really wanted to be a part of it. I knew I was never going to be part of the band, but to be a part of the story. I kept calling my agent asking, “Any word, any word?” He went “no, no, no.” And then a week later he came back and said, “Actually, they want to offer you the role of Paul Prenter.” And I went, “Oh my God.” Really, because it’s such an interesting character. When I first read the script, I knew nothing about Paul Prenter and the effect he had on Freddie’s life, or the band’s life as well.

Of course. Paul is one of the most intriguing characters in the film. We don’t know where his loayalties and motives lay through much of the story.

I walked out of the film really wondering, despite what he does to Freddie and the band: Did Paul really love Freddie?

I think he did, yeah. I think he did. There are so many stories when you research this role and this period in Freddie’s life. Where they lovers at any point? You know, it’s kind of hearsay at this point. Six of one, half dozen of the other, say they didn’t. So I wanted to play the idea that they weren’t just friends, they were companions. And there was that sense that you got from Mary Austin [Freddie’s ex-wife, played by Lucy Boynton] that there was almost a jealousy between those two.

So I think he really did love him. I think the problem, what happened to Paul, was the power he was given. Because they were, at the time, both quite closeted in their sexuality, they turned to each other. In that, he became a confidante to Freddie, and the power he then had over Freddie, Paul turned to his own advantage rather than to the bands or to Freddie’s career. Brian May and Roger Taylor both say he was the reason that one of the band’s albums didn’t do very well in the states because Paul Pretner would tell—and this is to quote Brian May—he would say “Freddie says ‘[email protected] off’” to all the US press and to the radio stations in the US. And Freddie never even know these calls had come in.

Paul died in 1991 of AIDS. Did you meet with anyone that knew him or interacted with him personally?

Peter Freestone on set. He knew him. He would have been around the same time; he was a personal assistant to the band. And when Paul became [Freddie’s] personal manager, Peter Freestone became the personal assistant. So they both kind of went up a tier. So he was invaluable to me for me to speak to and to find out about [Paul]. You mentioned family members—I tried to get in touch with them, but couldn’t in the end. When you’re doing a movie like this, you don’t want to be guided by too many voices. Everyone had their own agenda, so a lot of my research came from books, and there’s a wonderful documentary called The Great Pretender about Freddie’s life. There’s a lot of video footage of him doing his job, being a manager for the band and being a manager for Freddie. One thing that really comes across in all that footage: wherever Freddie is, Paul is just behind him. He’s always in his ear, and he’s always looking around.

So what did Peter tell you?

One thing Peter Freestone always said was, “When they were out, you know, either scoring drugs or scoring guys, Paul always made sure he had himself sorted out, then he took care of Freddie.” So that was really interesting for me. That was the mindset I had. He always had Freddie’s agenda in mind, as well as his own.

Wow. Now, have you seen the film yet?

Yes, I was at the world premiere in London, which was unreal. 7,000 people watched it.

I think they did to every song. It’s a publicity dream, and when you’re one of the actors in the piece, and when “We Will Rock You” comes on, but they don’t play the whole song, then you’re like guys, come on. Because the audience, they were in it, they were just foot stomping and going crazy. And you’re like this is a talky bit, it’s one of my big scenes!

They were head banging and rocking out at the guild screening we saw. I’ve never seen that happen in a press screening before. Hopefully, that speaks well.

I think it does. That’s the kind of celebration we wanted this movie to be—a celebration of all those songs. Even when you watch the movie, and my character is fired and “Under Pressure” kicks in, you’re just like what a tune. You forget that they have these songs that are so iconic. Sometimes you don’t associate them with the band, or even Freddie Mercury. They’re just great songs. So to have them all together is special.

This is your first big-budget Hollywood film. How is the process of filming different for you?

What I discovered is, it’s about time. What the bigger budget gives you is more time. It gives each different part of the production an opportunity to do it’s ultimate best. Because you’re always up against the clock with a production. Even doing Downton [Downton Abbey] so many years, you get to the point where there’s a big scene, but we four hours to get it. So I felt we had the luxury of time, and time when you’re filming—every director, every producer would say that is the greatest gift. That’s the one thing I really sensed was the amount of time we had. Obviously that’s so important for a project like this with all these big set pieces.

The film is notorious for having tension on set. That happens. When you’re on a big production like this, for you, as an actor, how do you cope with that kind of creative friction or a tense environment?

I have to say, as a cast and crew, we were incredibly close-knit. While obviously, as you mentioned, there were certain events that changed some of the team in charge, I have to say that as a band of Rami, Joe, Ben and myself, and Lucy, already before anything had happened we’d already formed a close-knit bond. I think, what we found, was that we turned to each other, and we checked with each other to make sure we were all still on the same page with where we started, and where we wanted to end. 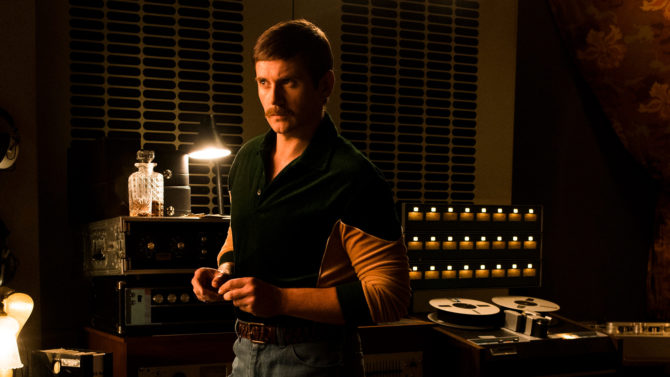 You’ve played a number of queer characters in your career.

There’s been a lot of talk, other actors, who have played gay characters, were advised by their agents or their managers against doing so because that would mean getting typecast as a gay character, or that the public would think they were gay in real life which could damage their career. Did anyone ever warn you against it for fear of typecasting?

Related: Garrett Clayton spills major tea on the career advisor who told him to stay closeted

No. No one ever advised me against playing a gay character or any character. If I believe in the role and the character, and I believe I can do it justice, then I want to do that. So I’ve never had any push-back from my team, ever, actually. That’s probably why I still have the same team I have. It’s all about the work.

Speaking of characters, we have a lot of Downton Abbey fans who read our site…

What’s the status on the Downton Abbey film?

I just wrapped. I literally just flew into New York last night, and I just wrapped yesterday. So it’s great. And to be back around those guys, and to have Maggie Smith in full voice and be her catty self…

You have to be on your toes. Forget about what she has to say on the show, you want to be on the right side of Maggie because she can be cutting about anything.

There’s so much that she’s taught me, just, as you say, watching her and being around her. There’s so much. One thing she does, and she did the other day: she still finds so much enjoyment in her work. And she’s still an absolute perfectionist about what she does. You get the impression that you get to that point in your career, and you could almost switch off in a way. You could just say, “oh, I’m going to do this thing…” But she turned and she discovered a little beat in a scene. And she just walked up to me and said “watch this, isn’t it delicious?” And the fact that she can still find that enjoyment and find those tiny nuances that make a Maggie look not the look you saw in the episode before. She’s amazing. So her subtlety of those changes, the fact that she’s so, so precise—that’s what I learned from her, precision as an actor.

Right now, I don’t know. I’m kind of so busy with this, I’ll kind of see where it goes. And I’m getting married in January.

Which, if my fiance has her way, it’ll be as expensive as Bohemian Rhapsody.

Funny how that works.

So that’s the next plan, and enjoying this ride.

EDIT: This article has been updated to correct words difficult to understand in the original interview recording.

Tiffany Trump’s former BFF speaks out: “Her dad treated her like sh*t her whole life”