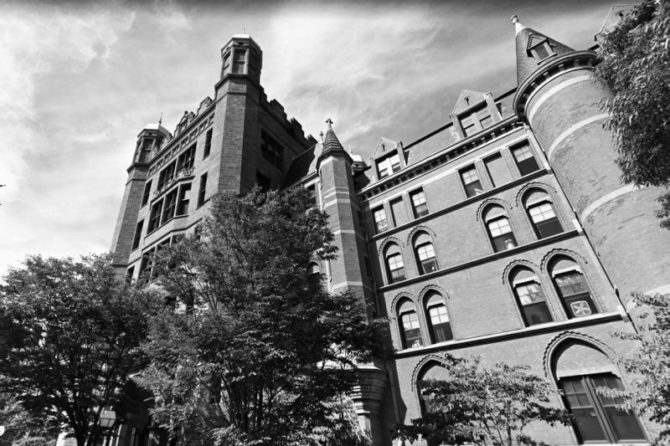 As Brett Kavanaugh prepares to testify before the Senate Judiciary Committee about the string of sexual assault allegations made against him, his gay college roommate is speaking out about what it was like living with the contentious Supreme Court nominee around the same time he was accused of assaulting multiple women.

Spoiler alert: It was totally disgusting.

Kit Winter lived with Kavanaugh and a third roommate in a three-man suite at Yale in the fall of 1983. In a new piece by The Cut, Winter, who is gay, describes in dark detail what it was like living with Kavanaugh, and the “grim” conditions, both physically and socially, he had to endure.

Winter shared a bathroom with Kavanaugh, who he describes as a “loud, obnoxious frat boy-like drunk” type who was “frequently drinking excessively and becoming incoherently drunk.”

“There was a lot of vomit in the bathroom,” he recalls. “No one ever cleaned it up. It was disgusting.”

“It’s weird never saying hello to one of your two roommates,” he says. “At the time, my response to most stuff was to listen to more punk rock music and to have a scotch. I felt very abandoned.”

But the most disturbing part of Winter’s story involves the time someone nailed a dead bird to his private bedroom door.

Winter describes coming home one day and finding a pigeon nailed into the heavy wood door: “It wasn’t rotten or anything. I assumed that someone found a dead bird on the ground.”

“I interpreted it as an act of social hostility slash terrorism. I thought it was a very clear message. ‘We don’t like you, and we don’t want you here.’ I didn’t know who it was who didn’t want me here. I didn’t know who had done it.”

As for Kavanaugh’s claims to FOX News that he wasn’t a huge drinker in college, Winter says that simply isn’t true.

“Having witnessed the level of drunkenness of Brett and his crew in that dorm, and the vomitous aftermath in the bathroom, I find that very hard to believe.”

He continues, “I was not a blackout drinker, but there’s tons of stuff I don’t remember because I was drinking a lot, frequently. Anybody who drank a lot in college and can stand up 35 years later and say, ‘I am sure that did not happen’ inherently lacks credibility to me.”

Related: Memers aren’t holding back against Brett “I am not a rapist” Kavanaugh