Brian Sims reminds me of that older next-door neighbor gay kids might have had crushes on in elementary school: sexy and smart, and so friendly we almost didn’t feel like outcasts when we were in his presence. And like those guys, our imaginations would run to the impossible dream: If only a man like that could be gay…

Sims, the 39-year-old Democratic member of the Pennsylvania House of Representatives, did in fact grow up gay, and his success in politics is making another dream come true: That LGBTQ people have an openly gay place in American politics. While there are a handful of out members of Congress (only Tammy Balwin in the Senate), at least we now have role models to emulate and inspire.

As an interviewee Sims is uncensored, yet somehow manages to answer every question like he’s read, contemplated, and written down the answer before you’ve even spit it out.

He speaks quickly—“it’s a habit I’ve always had”—and the only time he was at a loss for words was when I asked him what he thought about Cynthia Nixon’s run for Governor of New York (“I really haven’t had time to think about it”). The pause before he spoke was the one time over the course of two interviews that I had a moment to write down a note.

He was happy to opine on everything from his favorite TV shows—“I don’t think I’ve missed an episode of Drag Race or Project Runway—to his partner of four years—”We’re a regular couple. Anytime I hear that we have a fairy tale relationship, I say no, we have a very real relationship.”

The discussion of his gay-world-renowned beard could take up an entire column.

Here’s what he had to say to Queerty in our exclusive interview.

Do you want to be the first gay President?

No, but I want to help her get elected. It won’t be me. The myriad of issues that women deal with in a patriarchal society gives them a leg up in our environment…It will happen in the next election cycle or two.

How do you take on being a serious politician and one of the biggest sex symbols in the gay stratosphere?

It’s a little-unmade bed. First and foremost, I don’t have a view of myself as a sex symbol in politics. I want everyone to feel attractive and validated. I don’t mind that people find me attractive, but women have had people dismiss them as subjects for their entire lives because they’re found attractive.

To those gay men who are in their teens and feel physically inadequate because they feel overweight like you did, what do you tell them?

I spend quite a bit of time talking to that generation. What I often tell people is, one day, perhaps sooner than later, those differences are going to be things you take pride in. Why be another horse in the herd when you can be a unicorn?

You wear muscle shirts on Instagram. Can gay women in politics wear tank tops without scrutiny?

It’s a double standard, the ways in which men are interacted with, depending on their dress and clothing. The LGBT community is not devoid of sexism and misogyny. 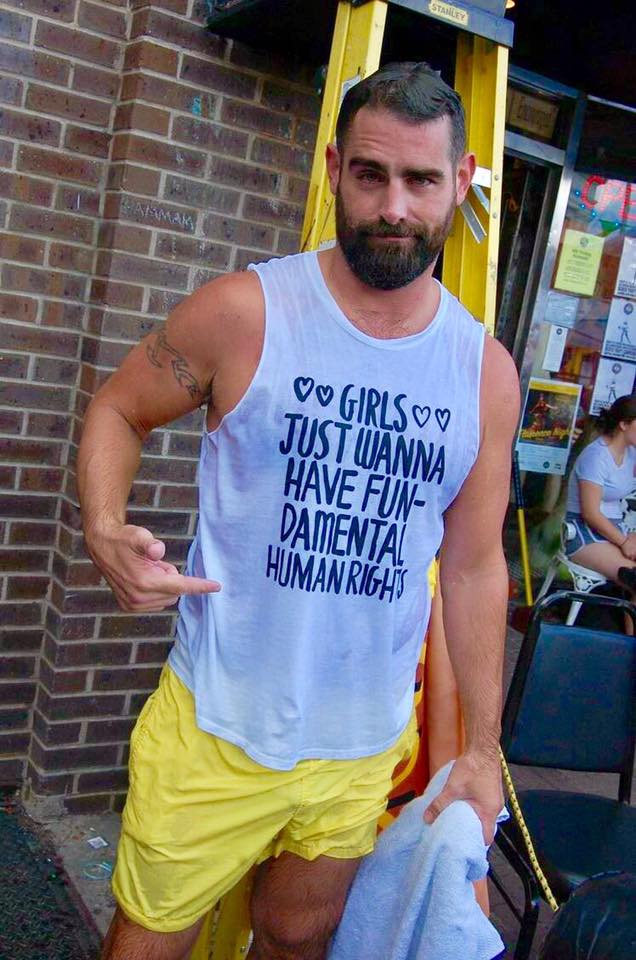 As a gay man in politics, is there any added concern about maintaining a proper appearance?

I’m susceptible to having my feelings hurt. I’ve made the mistake now and again of over-reacting to a comment that was negative about my body type. I don’t want to be thick-skinned but I want to have an informed skin. Sometimes my beard looks good and sometimes my beard makes me look like I came out of the mountains for supplies.

Do you feel limited as to how you can act in public? Do you hold back?

No. If I were a gay woman, yes. But I carry a lot of privilege around. I don’t have a lot of extra pressure on myself.

How is the #metoo movement affecting politics?

I don’t even know where to start. It’s finally centering women in the discussion. It’s reminding everyone that bad acts can’t be passed off as boys being boys. It’s resetting a standard.

I don’t think it’s fair to say all gay men do. In my experience, it’s far from all gay men. Yes, it happens to me. Gay men, many times, communicate in sexual innuendo. Rightfully or wrongfully, they bring those conversations into scenarios where it isn’t appropriate. My career has been about battling the sexualization of women. Some of the understanding is born of my own scenario, though they are incredibly different. The power dynamics are not the same.

I don’t know. I know that I have gay colleagues who use apps to date and to pursue relationships. I say that without one ounce of judgment. How people choose to act sexually is entirely up to them. That’s not to say a critic wouldn’t try to say something about it.

I don’t care. I find all labels relatively harmless. Identities that people find within the community are camaraderie, about relating, about coming together, about fraternity. I’m well into my 30s, and at first, I didn’t know what to make of it, then I spent time around bears and felt grateful to be included in their community. They are interesting, kind, creative, and a lot of fun.

What is the LGBTQ cause closest to your heart?

First and foremost, representation. I have traveled the entire country to remind people about what being represented looks like. Barney Frank’s quote rings out daily: “If you don’t have a seat at the table you’re probably on the menu.”

What are your feelings about PrEP?

The bad controversy is somewhat manufactured—people who choose to shame others about the type of sexuality they exude or are adopting. Most people who are being pro-active about their health deserve a high-five and a hearty handshake.

What is the biggest cause, otherwise, closest to your heart?

Guns. I absolutely think things are changing after Parkland, both in a micro and macro way. In a micro way, the news is being dominated by these young people’s voices about this incident and the next one. On a macro level, we’ve reminded people that they are going to be the mantles. Right now they are doing more about guns than Congress.

What do you think of Trump?

I think Trump is just the most painfully unqualified person to ever be President. His level of bigotry and homophobia and transphobia and xenophobia—and he’s given a free pass for all of those people like him to step up and lead. I think he’s a monster.

Who are your favorite singers?

I’m a big Grateful Dead fan, and I’m digging on Kesha. Her new album is spectacular. During her time off she’s been honing her craft. She’s come back with a powerful voice and a powerful message.

Do you have a favorite movie this year?

Black Panther. I like superhero movies. I like underdog success stories. Finally, for the first time in America, a black American got a taste of what it feels like for every white American when they go to the movies. For them, about them, intended to lift them up. It’s about damn time.

She’s denied it, but do you think Oprah will run for President?

I don’t think so. I hope not. This country is filled with women who have spent years understanding the political process and we need to get away from this idea that simply having notoriety equals understanding job requirements.

Since you’re up for reelection yourself, will there ever be a beefcake pictorial?

No, but I’m sporting a really fun mustache now.