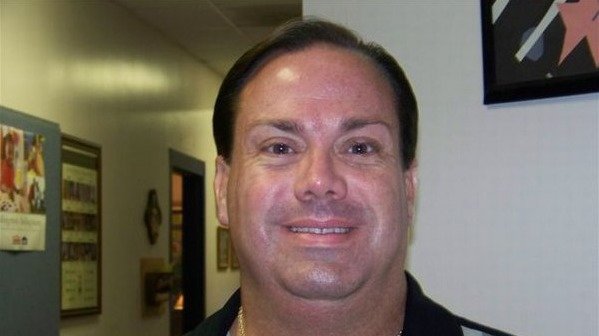 High school French teacher David Laughinghouse (pictured) thought he was chatting with a 35-year-old man when he shared some risque pictures of himself on Grindr. Turns out, he was being catfished… by two of his own students.

The students were 16-year-olds Brian Anderson and Brittney Luckenbaugh, who downloaded the 18+ app with the intention of trapping their teacher. After leading 51-year-old Laughinghouse on, they got him to share his private photos, then they proceeded to share them around school.

According to the Onslow County Sheriff’s Office, the teens “[knowingly disclosed] an image of another person… without the affirmative consent of the depicted person.” As a result, they were arrested and charged with misdemeanor disclosure of private images.

“David did not deserve this,” Kay Comuntzis Getsinger, a teacher at Swansboro Middle School, says, “and now those ignorant, mean-spirited students have not only hurt him but will live with this the rest of their lives.”

As for Laughinghouse, after being publicly humiliated, the school suspended him with pay while police conducted an investigation. He has since been reinstated. Sort of. Instead of returning to his old job, he’s been exiled to a computer lab at a nearby school, where he teaches remotely.

Now, a Change.org petition petition has been created by a former student demanding Laughinghouse be given his old job back.

“A source close to Mr. L says that he is devastated by this decision,” the petition reads. “This ’compromise’ effectively isolates him from his support system.”

“He’s still being punished after becoming a victim.”

So far, the petition has gathered nearly 4,500 signatures.

Anderson and Luckenbaugh were released from jail this week on $5,000 bail. They are scheduled to appear before a judge on June 15.