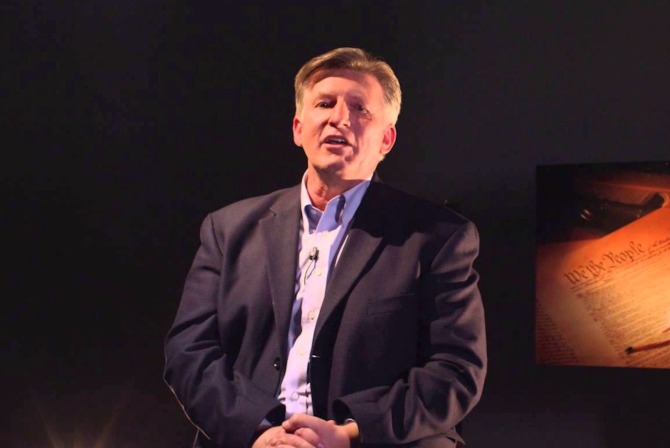 This just in: According to Christian extremist Rick Wiles, the Las Vegas shooting was the result of a vast “gay/lesbian Nazi regime” which MGM Resorts is trying to cover up. That explains why Mandalay Bay security guard, Jesus Campos, who initially confronted the shooter, sat down to talk with Ellen DeGeneres about the shooting earlier this month.

“America has become a Nazi state,” Wiles said on a recent broadcast of his End Times TruNews radio program. “The deep state is a Nazi state. That is why Campos appeared on a daytime talk show hosted by a fast-talking, dancing comedienne, and, let me add, a lesbian, because this Nazi regime is a gay/lesbian Nazi regime, just like Nazis in Hitler’s day.”

Oh, and speaking of Hitler, Wiles adds, he was “a bisexual.”

“The top Nazi leaders of the Nazi party were homosexuals,” he said. “The Nazi takeover of Germany was a militant homosexual fascist takeover; that is what is taking place in America today.”

Wiles went on to explain that the real reason Campos spoke to Ellen was because officials at MGM Resorts were worried he’d “spill the beans about the shooting timeline if he were grilled by real journalists” and give away their secret.

He also warned listeners to beware of government-run “death squads” and that “there will be a day that they tell law enforcement to execute your children right in front of you and they will do it.”