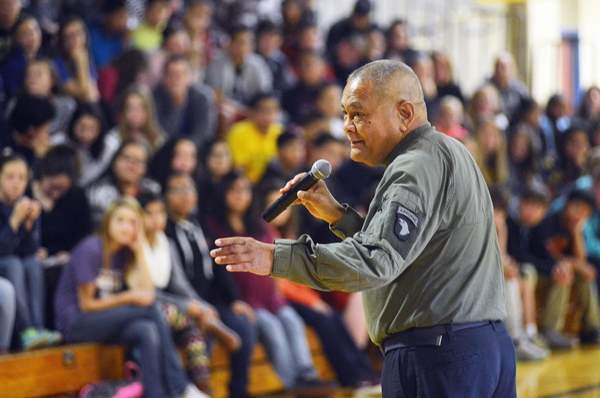 Lou Nakapalau is a member of the Echo City Council in Oregon. According to the East Oregonian, he recently got into a Facebook fight with openly gay filmmaker Joe Wilson and things didn’t end so well.

The fight happened on the Facebook page for Wilson’s film Kumu Hina, a documentary about a transwoman from Hawaii. Wilson posted an article about the Trump administration’s statement announcing that transgender workers will no longer be protected by federal anti-discrimination laws.

Nakapalau, whose Facebook profile proudly displays a picture of a Confederate flag, commented that trans people already have rights and that he’s “Sick of the LBGTQ crowd shoving their ho keyed up agenda down my throat.”

A lengthy, profanity-laden verbal sparring match between the two men ensued, culminating in Nakapalau writing: “When you croak of AIDS (Anally Injected Death Serum) I’ll spit on your grave!” He followed that up with antigay slur.

Nakapalau has refused to apologize for the remarks, though he did edit some of them to remove the profanity. The comments have since been removed from Facebook.

Last Thursday, the Echo City Council met to discuss the incident. The Council voted to issue a formal apology for Nakapalau’s bad behavior. Meanwhile, Nakapalau sulked in his seat, refusing to vote or comment on the matter.

The official apology reads, in part:

The Echo City Council would like to extend its sincerest apology to those who were offended by comments made by a council member in a Facebook dialog reported by the “East Oregonian.” Comments of individual council members on their personal social media accounts do not have any endorsement or approval of the council as a whole nor do they represent city policy.