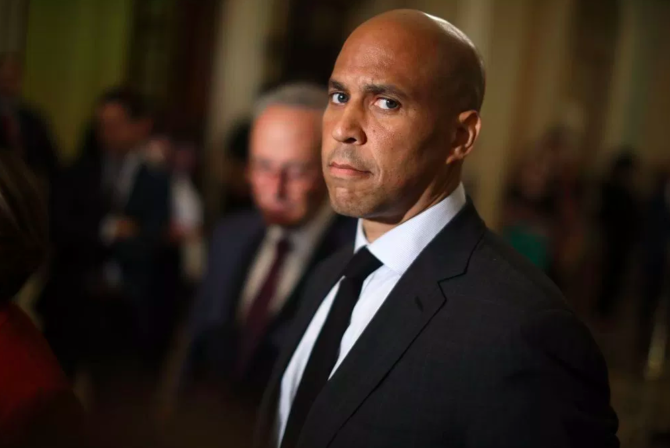 Cory Booker recently sat down with the Philadelphia Inquirer to discuss a possible 2020 presidential bid, bachelorhood, and, oh yeah, those pesky gay rumors that he can’t seem to shake.

According to the Inquirer, Americans haven’t elected an unmarried president in over 100 years, not since Grover Cleveland in 1884. Before that, the only president to take office as a bachelor was James Buchanan in 1857.

If he runs in 2020, Booker would try to be the third… which, inevitably, leads to the tired old question: Is Cory gay???

In the last presidential campaign, Sen. Lindsey Graham (R., S.C.), who is also single, faced questions about campaigning as a bachelor (he suggested a rotating cast of family and friends could be first lady). In past political campaigns Booker’s opponents have tried to use his single status to question his sexuality.

49-year-old Booker, who has talked openly about his orientation many times before, tells the Inqurer flat out: “I’m heterosexual.”

“Every candidate should run on their authentic self, tell their truth, and more importantly, or mostly importantly, talk about their vision for the country,” he adds.

Booker goes on to say that conventional thoughts on the president and his (or her) family have changed.

Says he: “Clearly the norms of family relationships have been changed dramatically as you’ve seen people across this country being elected to offices with all different kinds of family situations, including the president who has had three spouses.”

(And, we should add, countless mistresses. Including two he tried to pay off for their silence.)

Booker concludes by saying that, if he does run in 2020, he’ll have nothing to hide.

“I’m going to run on who I am,” he says, “whether that’s running for reelection [to the Senate] or running for president. I’ve always trusted the voters enough to evaluate me on the content of my character, quality of my ideas, and my ability to do the job.”