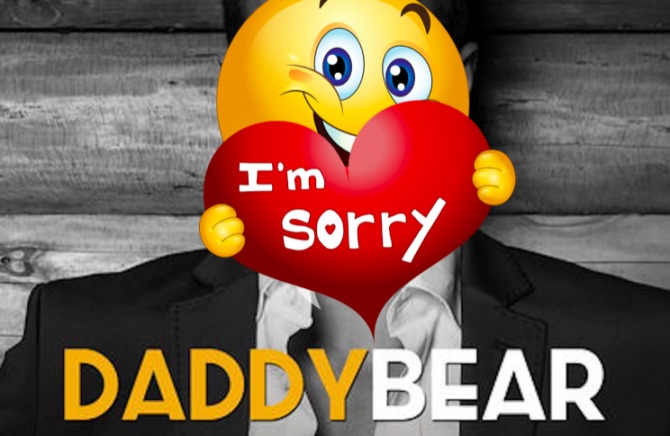 Quick recap: Last month, we told you about DaddyBear, a dating app that aims to connect “wealthy gay daddies” with so-called “healthy gay bears,” whatever that means.

Shortly after the article was published, a spokesperson for Daddybear wrote into Queerty‘s comments section to further explain the “healthy” claim:

With the fact that most gay men care more about health than sex when seeking gay relationship, we create this gay dating app to meet their needs. If you are worried about meeting gay men who are living with HIV, then you can feel relieved with our App because we are trying our best to make sure that all users you meet will be healthy and without HIV, starting from adding a feature to allow users to verify their health condition.

Things only got worse when Daddybear’s CEO, known only as “Justin”, tried to better explain his stance in an interview with INTO‘s Mathew Rodriquez:

Now, it seems the company has finally realized the error of its ways and issued a formal apology to “all gay men” for stigmatizing HIV.

In the apology, released today, the company says Justin has learned from his mistakes, then tries to explain why he made the comments in the first place:

Justin is a gay sugar daddy who is loyal and prefers long term relationships. His last partner left him for no reason and he has had a really hard time to accept that breakup. Recently, Justin heard that his partner was infected with HIV during their relationship when he was having unprotected sex with another guy who was with the malicious intent to transmit the disease. After diagnosed, his partner felt ashamed and desperate, so he chose to put an end to the relationship. Although Justin couldn’t forgive his betrayal, he was so mad at the guy who infected his partner. That anger lead him to wrongly misjudge the present situation and make an immature decision to build a gay dating app that doesn’t allow gay men living with HIV.

Nevertheless, the team at DaddyBear says Justin has taken people’s feedback to heart and would like to “express his gratitude” to everyone who helped him see that just because someone is HIV-positive it doesn’t mean they’re a bad person. #themoreyouknow

In order to make it right, Justin and his team had a deeper look at recent study results towards people living with HIV. Then we realized that there are many hiv [sic] positive guys out there and most of them are receiving systematic treatment which can help them have an undetectable viral load and highly prevent HIV transmission. Besides, it is hard to know if someone is truly HIV+ or HIV- according to his profile on a dating app. So we do not advocate unprotected sex.

The letter concludes by saying:

In the end, we want you to know that DaddyBear is a great gay dating app for gay sugar daddies, gay sugar babies and all gay men.

And now the burning question… Will you be using the DaddyBear app? Take our poll below.