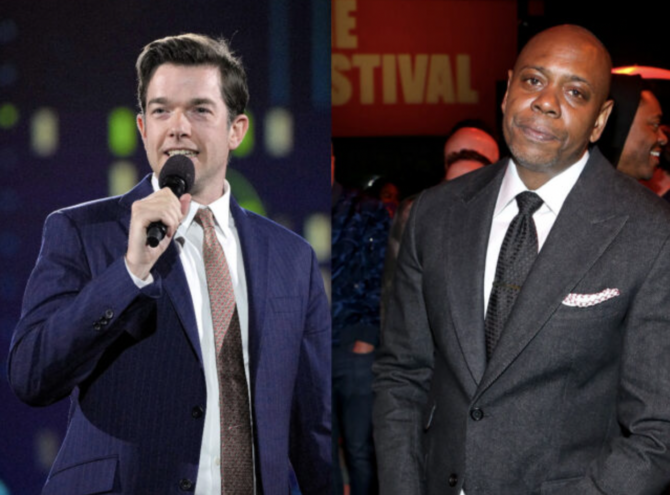 John Mulaney has had a straight year of controversy since leaving his wife of six years for Olivia Munn last May, but a dedicated core of his fans have stuck by him through it all.

However, after ambushing the crowd at Ohio State University’s Value City Arena on Friday with a surprise opening set from transphobic comedian Dave Chappelle, it seems the goodwill of some fans may be dwindling.

Chappelle’s Netflix special The Closer from last October went especially hard with punching down at the trans community, and the ensuing controversy with Netflix is well-documented.

Mulaney on the other hand has drawn queer fans in for years with characters like Stefon on Saturday Night Live and light-hearted jokes like his New in Town bit comparing his childhood self to “a 67-year-old gay man who’s kind of over it.”

His decision to bring Chappelle on as the opener on his “From Scratch” tour stop in Columbus, Ohio has those same fans feeling forsaken…

“don’t like chappelle’s transphobic material? don’t watch it” sure gets blown out of the water when he can just show up at a john mulaney show and fuck up your night

I take back every defense I’ve made of John mulaney, very divorced of him to have Dave Chappelle open for him and tell a bunch of transphobic jokes. Elon Musk-esque. It’s serving moldy leftovers in the lunchbox in the office fridge.

Hey cis people can you please acknowledge that trans people should be able to go out for a laugh without being reminded our existence is constantly under attack? It was shitty of mulaney and shitty of chappelle.

dave chappelle is so pathetic and john mulaney is so weird for not only inviting him but then essentially co-signing his transphobia and bullshit by thanking him for his time being there. what a joke.

John Mulaney is dangerous to us for the same reason as Dave Chappelle, he’s offered the public a choice between the funny guy they know who makes them laugh, or disposing of trans people as valid beings with an interest in our own humanity

Most of all, queer fans seem to be hurt that they were made to experience Chappelle’s transphobia unexpectedly in a place they’d assumed would be safe from such discrimination.

Hopefully, Mulaney can handle the criticism from the queer community better than Chappelle himself has.